Micromax Canvas Engage A091 has been spotted online featuring Android 4.4, 4-inch display and a quad-core processor. 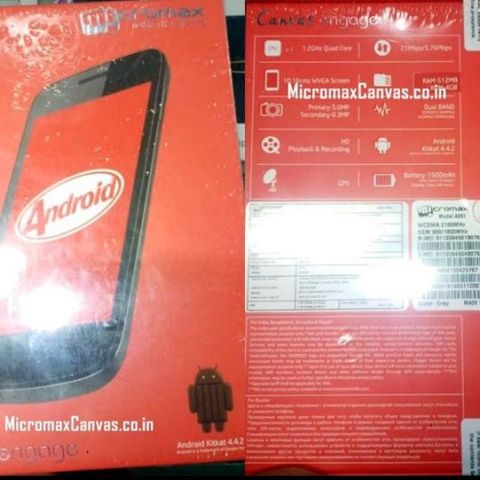 Micromax Canvas Engage supports dual-SIM (GSM GSM) with dual standby functionality. It has a 4-inch IPS display with 480x800 resolution. The smartphone runs on Android KitKat and has a 1.2GHz quad-core (unspecified) processor. It features a 5MP rear camera and a 0.3MP front-facing camera for video calling.

The Canvas Engage has 512MB of RAM and 4GB of inbuilt storage expandable up to 32GB via microSD card slot. Connectivity-wise, the device supports Bluetooth, Wi-Fi, GPRS, GPS/ A-GPS and 3G. It packs a 1500mAh battery, which, according to the company's claims can deliver up to 5.5 hours of talk time and 200 hours of standby time on 2G network.

The eBay listing states that the Canvas Engage comes preloaded with popular apps including Kingsoft Office, Opera Mini, Getit, M! Live, Smartpad and MiGames. The Micromax Canvas Engage A091 has not been officially launched yet and the final price of the device may be even lesser. The smartphone competes with the budget Moto E and Micromax Unite 2, priced at Rs 6,999.

Micromax Canvas Unite 2 is the first smartphone to support 21 Indian regional languages including English, Hindi, Marathi, Telugu, among others. It has a 4.7-inch IPS display with 800x480 resolution. The Unite 2 runs on Android KitKat 4.4.2 and has a 1.3GHz quad-core processor. It has a 5MP rear camera and a 2MP front facing camera. It supports advanced connectivity options like 3G, WiFi, Bluetooth and comes with 32 GB expandable memory.