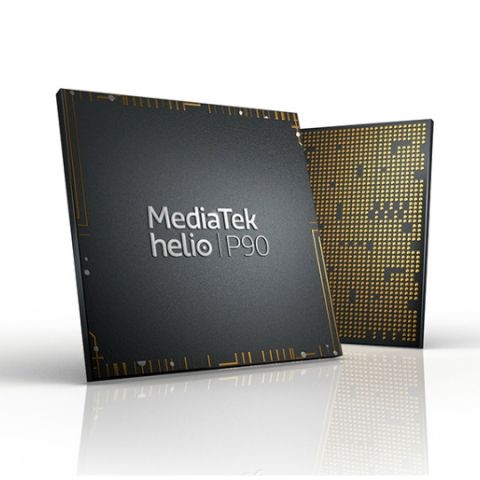 The Helio P90 features two high-performance Arm A75 processors that can clock speeds of up to 2.2GHz, while six A55 processors are set to operate at up to 2.0GHz.

MediaTek recently debuted its P70 SoC with the Realme U1 smartphone and it has now unveiled its latest Helio P90 platform. The company claims that the new processor features improved AI processing capabilities, around 4X more powerful than the Helio P70 and Helio P60 chipsets. This leap is being attributed to the APU 2.0 architecture, which is said to be a fusion AI architecture developed by MediaTek. The Helio P90 features two high-performance Arm A75 processors that can clock speeds of up to 2.2GHz, while six A55 processors are set to operate at up to 2.0GHz. The chip is expected to ship globally in consumer devices starting Q1 2019. It comes with an Imagination Technologies PowerVR GM 9446 GPU. The company's newest CorePilot technology is also used, which is a set of monitoring, task scheduling and performance optimization technologies.

The new chip also brings ISP improvements. Smartphone manufacturers that use the MediaTek Helio P90 platform will get to choose to equip either a 48MP camera or a 24+16 MP dual camera configuration on their device. The chip will enable capturing at 48MP resolution with up to 30 Frames Per Second (FPS), or slow-motion at 480FPS in HD. The SoC also sports triple image signal processors that are said to support 14-bit RAW and 10-bit YUV processing. There is also a new ISP AI engine, which is said to accurately detect faces and scenes in real-time under low light and motion conditions.

“The Helio P90 gives device makers the ability to offer outstanding camera features, battery life, performance and top of the line AI capabilities, while making devices accessible to mass-market consumers,” says TL Lee, General Manager of MediaTek’s Wireless Communication business unit. “The Helio P90 is an AI processing powerhouse with ultra-fast performance and a host of AI-powered imaging improvements. This chip will reset consumer expectations of what a smartphone can do, and usher in a new era of super high-resolution smartphone photography to the market.”

As mentioned above, MediaTek is touting the new processor to come with enhanced processing when it comes to AI-related tasks. It features human pose detection, which can track and analyze body movements and it also supports Google Lens, deep-learning facial detection, real-time beautification, object and scene identification, artificial reality (AR) and mixed reality (MR) acceleration, along with other real-time enhancements for photos and videos. The chip also supports applications developed using frameworks such as TensorFlow, TF Lite, Caffe and Caffe2, based on MediaTek’s NeuroPilot SDK.