The new processor is used on the Oppo A5s, which will soon be launched in India.

The chip sports octa-core Arm Cortex-A53 CPU that can be clocked at speeds of up to 2.3GHz. 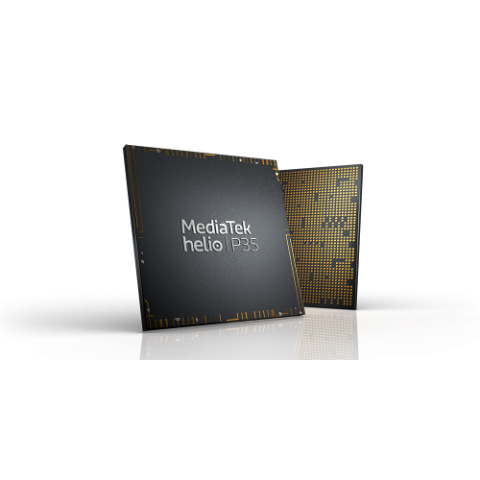 MediaTek has announced its latest Helio P35 chipset, which we can expect affordable smartphones in India to come equipped with. The new chipset is built on TSMC’s 12nm FinFET fabrication process and comes with support for Full HD+ resolution display and a 20:9 display aspect ratio. The Helio P35 features ‘light’ AI enhancements, which includes support for face unlock, photo album, single and dual camera bokeh. It features an octa-core Arm Cortex-A53 CPU that can be clocked at speeds of up to 2.3GHz, which is coupled with an IMG PowerVR GE8320 GPU running at up to 680MHz. The new chip is expected to debut with the Oppo A5s(₹ 8990 at amazon) smartphone, which the smartphone maker is teasing to launch soon in the country.

The MediaTek Helio P35 is also features a LPDDR3/LPDDR4x memory controller and comes with MediaTek’s NeuroPilot support. The chip is cable of delivering Cat-7 network speeds and supports Bluetooth 5.0 protocol. It also enables simultaneous coexistence of  Bluetooth and Wi-Fi 5 (802.11 ac) for a boost in throughput. For optics, the processor supports dual camera configurations of up to 13+13MP sensors and comes with a hardware-based depth engine for enabling bokeh shots. The platform also supports a single camera mode of up to 25MP with simulated bokeh effects, along with MediaTek’s implementation of Electronic Image Stabilization (EIS), which is paired with a rolling shutter compensation (RSC) model to  Helio mitigate warped video when capturing fast action content or panning.

As mentioned earlier, the new chip is expected to debut in India with the upcoming Oppo A5s. The smartphone is expected to launch soon in India and is confirmed by the company to feature a waterdrop notch display design and come equipped with a 4230 mAh battery.