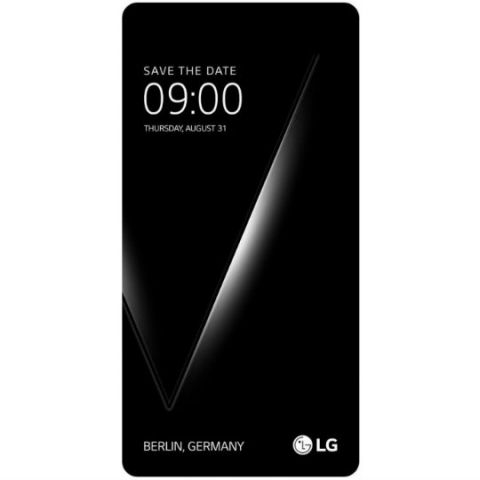 LG V30, the second flagship smartphone from the South Korean electronics giant will be announced on August 31. LG has started sending out save the date invites for an event in Berlin, where it will showcase the V30 with a Full-Vision display. The invite obtained by CNET also shows the design of the upcoming smartphone with a V-shape hinting at the V30 launch.

The August 31 launch date is in line with previous rumours which suggested that the LG V30 will launch a day ahead of IFA 2017. LG V30 recently leaked in the form of renders hinting at a metal and glass design similar to the LG G6 released early this year. The V30 is widely rumoured to be the first LG smartphone to sport an OLED panel and Google inadvertently confirmed the same at its developer conference in May.

With V30, LG is also expected to ditch the secondary display seen on the previous V series flagship. The smartphone is tipped to sport a large 6-inch display with thinner bezels, and an 18:9 aspect ratio. The handset is said to measure 151.4 x 75.2 x 7.4 mm in dimensions and will be powered by Qualcomm's Snapdragon 835 chipset. Rumours suggest at least 4GB RAM and an option for up to 128GB storage.

The V30 will also sport a dual rear camera setup, like its predecessor, and a fingerprint sensor placed at the back. The LG V30 is likely to feature a 3.5mm audio jack and use a USB Type-C port for charging. The glass back of the smartphone means that the V30 will support wireless charging. In the past, LG has used the secondary display on its V-series to differentiate it from G series flagship. With no secondary display on the V30, it remains unclear how this one will be differentiate from G6.