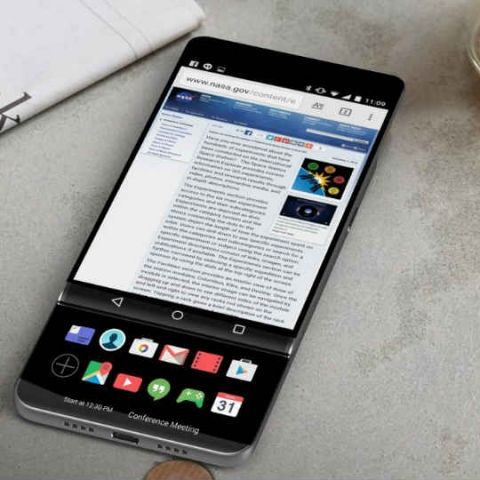 LG is expected to announce its next flagship, the V30 smartphone at IFA in September. The handset has been rumoured to ditch the secondary display and adopt an OLED display instead of an LCD display. Now the smartphone has leaked in the form of renders revealing the design and dimensions of the handset.

LG V30, the successor to last year's V20, will sport a metal and glass design similar to company's G6 flagship announced at MWC 2017 this year. The renders published by MySmartPrice in collaboration with OnLeaks suggests the smartphone will measure 151.4 x 75.2 x 7.4 mm in dimensions. The V30 is tipped to sport a 6-inch large Full Vision display with thinner bezels and rounded corners.

The 360-degree render shows the handset won't feature the secondary display, a signature feature of LG's V series smartphones. It sports a dual rear camera setup and rear-mounted fingerprint sensor similar to the one found on G6. Interestingly, the V30 continues to feature a 3.5mm audio jack and uses USB Type-C port.

LG V30's unibody metal and glass design suggests the handset will support wireless charging and might arrive with up to 128GB storage option. The handset is tipped to be officially announced on August 31, a day ahead of the official start of IFA 2017 in Berlin.

LG missed out on getting supplies of Snapdragon 835 chipset for its G6 flagship but V30 will get the latest Snapdragon chipset. The biggest change is expected to come in the form of a switch to an OLED panel, which is expected to become standard among flagship smartphones this year. The LG V30 will compete against Samsung's large-screen Galaxy Note 8 and Apple's upcoming OLED iPhone 8.