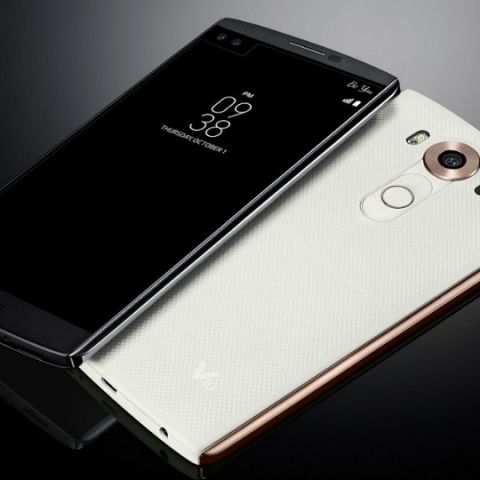 LG has announced the LG V10, which had previously generated hype surrounding its 2.1-inch secondary display and dual-front camera. Alongside these, it features a 5.7-inch QHD Quantum panel display, and dual front-facing speakers.

The LG V10's secondary display, named as ‘Second Screen’ by LG, resides right above the primary QHD display, and serves a number of purposes. It can show notifications when a fullscreen app is being used, like watching a video or playing games. It can also be used to arrange shortcuts of most-used apps, so that one can access them easily with one tap, without having to minimise the current app. The secondary display can also remain ‘always on’, showing information like time, weather, battery level, etc., when the main display is off. Its utility is somewhat similar to the curved displays of Samsung's Galaxy S6 Edge and Edge+, and while it does enhance its appearance, its real world application will be something that remains to be tested.

Another highlight of the smartphone is its dual-5MP front camera unit. It can be used to click 80-degree regular selfies and 120-degree wide angle selfies, respectively. The company has introduced manual mode video recording too. Using this, one can manually adjust parameters while recording a video, like white balance, frame rate, shutter speed, focus during recording, and ISO. Further, the phone supports three video recording modes: High Definition, Full High Definition and Ultra High Definition. As for the build, LG has said that it has used SAE-grade 316L stainless steel for the frame. According to LG, it is the same material used for making high-end watches and tools for surgery.

The LG V10 is powered by a Qualcomm Snapdragon 808 chipset, coupled with 4GB LPDDR3 RAM. The phone has a 16MP rear camera with f/1.8 aperture and optical image stabilization. It comes with 64GB of internal storage, with microSD card expansion up to 2TB. It has a 3000mAh battery which is non-removable, and runs on Android Lollipop v5.1.1. It is 4G LTE compatible, is 8.6mm thick, and weighs 192 grams. The smartphone will be available first in Korea, followed by USA, China, and a few important smartphone markets in the Middle East, Latin America, and Asia.