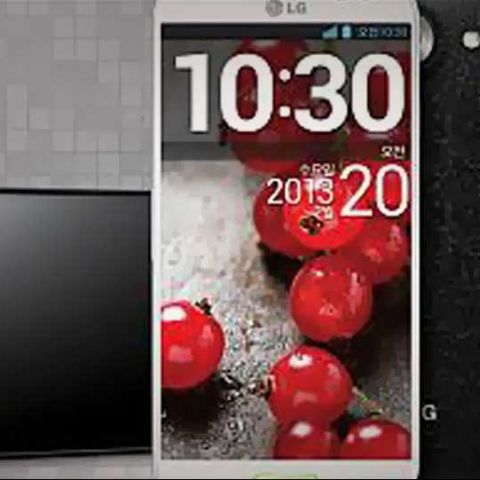 The Samsung Galaxy S IV launch is just a few hours away and the leaked spec-sheet of the phone showed a “Smart Scroll”, “Smart Pause” features. Both of them utilize the new eye-tracking feature that Samsung has built into the S IV, but it would seem that LG is not willing to let Samsung take all the glory.

LG has also announced the eye-tracking feature as part of its Value Pack upgrade for the Optimus G Pro. This update will only come to the LG phablet, and will allow video playback to pause and resume depending on whether the viewer’s eyes are looking at the screen or not (Smart Video). LG has also introduced a Dual Camera feature, meaning that it is now possible to take photos with both cameras simultaneously. One can even pause and resume video recording on the LG Optimus G Pro once this Value Pack upgrade has been installed.

Do We Really Need Such Features?

Back to eye-tracking. Smart Scroll and Smart Pause features might sound mighty impressive at first, but we wonder, do we really need such features in a phone? We’re pretty sure our race hasn’t reached that stage of laziness where lifting a finger and moving it a few millimetres to achieve scrolling has become an arduous task.

Also, let’s not forget how such technologies are often half-baked. When Samsung introduced the 'facial recognition' unlock method in the Galaxy S III, it was more of a gimmick than an actual security measure. It was extremely easy to trick. The S III’s Smart Stay feature was also buggy. We feel that the eye-scrolling and eye-pause could end up being in the same boat. For example, people can look at the bottom of their phones without the intention to actually scroll. What if you scan the page in a not very predictable manner (perhaps speed reading), with your eyes moving up and down, and maybe, all round? Would the eye-tracking scrolling go berserk?

We have a feeling that this ‘smart’ feature would lead to a lot of unintended scrolling. We also can’t help but wonder how effective this would be for people who wear glasses or suffer from Strabismus (cross-eye syndrome).

What We Actually Need!

It is a little disappointing to see manufacturers focus more on such features that don’t really add any value instead of working hard on innovating at the ground level. Why is it that despite all the technological growth, the battery in every smartphone offers the same performance as a year ago. There was a time when phones required to be charged once every three days, but today, it has become acceptable to charge one’s phone twice a day. Also, why is it that one must still fear putting liquids next to a cellphone? Sony has taken a great approach to making the Xperia Z somewhat water resistant and we want to know why a feature like weather sealing, cannot just be made a standard?

It’s not like things have all been bad. Nokia innovated mobile camera technology to a point where photographs are now possible even in low light. On the software front, they innovated City Lens, a feature that uses the camera to show you where points of interest lie with respect to your position. It is a really handy way of figuring out what’s around you if you’re a tourist in a particular city. Samsung also developed the S Pen, a tool that has come to be the highlight of the Galaxy Note. In fact, the entire range of software tweaks developed around it has also been quite good, including the Air View feature. Even Apple has managed to do a great job with Siri, albeit its effectiveness is limited to the US.

LG is one of the biggest manufacturers of displays, so it would be great to see the company focus on developing low-power IPS displays for phones, given that the screen is the biggest battery hog. They could also team up with Google to put together a voice-guided assistant into their phones, sort of like Siri. There is so much actual room for improvement of the user experience on a phone in both software and hardware and we really wish that phone makers would choose to focus on those, instead of always focussing on developing something new.