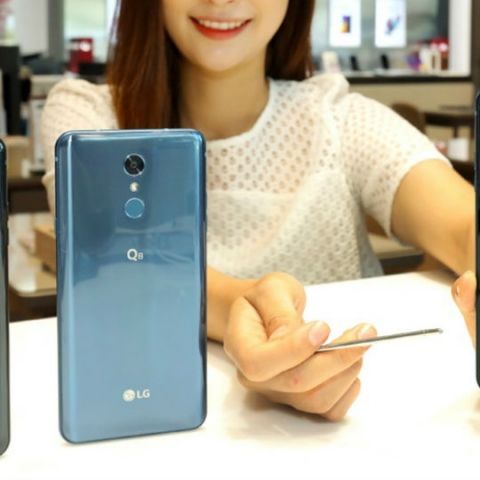 Just ahead of Samsung’s Galaxy Note 9 ‘Unpacked’ event in New York, its South Korean competitor LG has announced the LG Q8 (2018) phablet with a stylus. The phone is essentially a clone of the LG Q Stylus Plus which was launched a few months ago in the US. The LG Q8 (2018) comes with the screen-writing functionality that Samsung introduced in Galaxy Note 8 last year. With "Pop memo" users can write instantly from any screen. The options, including colouring book and GIF creator, work similar to the ones that were incorporated in the Galaxy Note 8. The phablet is priced at  539,000 won (approx Rs 33,000) in Korea and is the latest addition in the company’s ‘Q-series’ lineup.

The LG Q8 (2018) comes with a built-in 'stylus pen' for conveniently taking notes on a 6.2-inch full-vision design Full HD+ display that has an 18:9 aspect ratio. There are thick bezels on the phone and a single front camera. The volume rockers are on the left edge and the power button is on the right. On the back, there is one camera module with a flash, and the fingerprint sensor is located centrally below the camera. The smartphone is offered in two colours: Aurora Black and Moroccan Blue.

The phablet has been approved for military safety standard 'MIL-STD 810G' which is used by US Department of Defense and comes with an IP68 rating which makes the device water and dust resistant. LG claims that the smartphone has been tested in 14 categories including shock, vibration, high temperature, low temperature, thermal shock, and humidity and delivered a stable performance in various environments. The LG Q8 (2018) is powered by a Qualcomm Snapdragon 450 octa-core processor and comes with a 4GB RAM and 64GB of storage.

The phablet sports a 16MP camera on the back and uses 'Phase Detection Auto Focus (PDAF)' technology for fast focusing and sharp shooting. There is a ‘Q Lens’ feature that works like Google Lens. It analyses the subject in a photograph and finds related information on the internet. There is 5MP an ultra-wide angle camera which is capable of taking a group portrait.

The company has incorporated 'Hi-Fi Quad DAC' sound technology which is claimed to deliver an output close to the original sound. The DTS: X stereo sound technology adds stereophony to the content regardless of its source. The technology allows user to enjoy up to 7.1 channel sound even without a high-grade earphone. The phablet houses a 3300mAh battery with Quick Charge 3.0 technology.