LG is scheduled to unveil the LG G7 ThinQ tomorrow, but we might have already gotten a look at the different colour variants of the phone via leaked renders. Dutch website, WinFuture.de has posted renders of the upcoming device on its website. The images also show the smartphone from all angles and suggest that the phone will be available in Moroccan Blue, Raspberry Rose, and Black colour variants. The report also reveals that the upcoming LG G7 ThinQ may have the model number LM-G710. Further, SlashLeaks has also posted hands-on images of the upcoming smartphone. The images show the notch and how it can be hidden. It also suggest that the phone may offer a dual-glass design with a metal frame. 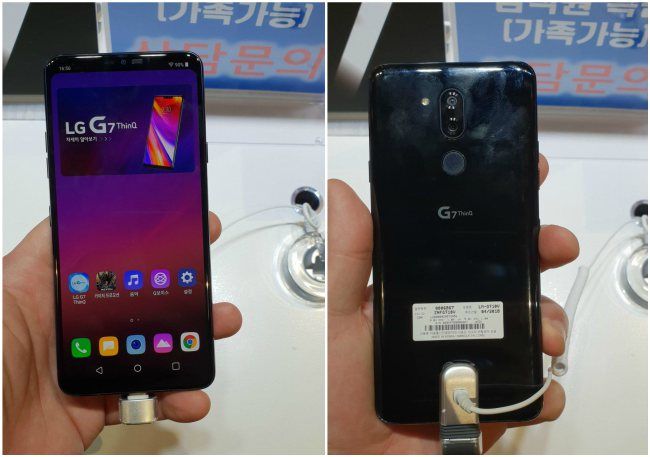 LG has already confirmed some features of the G7 ThinQ flagship smartphone. The device will feature a 6.1-inch QHD+ display with a resolution of 3120 x 1440 pixels. The display is said to offer a maximum brightness of 1000 nits and cover 100 percent of the DCI-P3 colour gamut. The phone will feature a display aspect ratio of 19.5:9 with an “almost 50 percent slimmer” bottom bezel.

LG also says that it will offer an improved audio experience with the G7 ThinQ. The new device is tipped to come with a “Boombox speakers,” which is said to increase the base sound level by more than 6dB. The company notes that the phone will make use of a resonance chamber design in order to increase audio output. LG added that the users would be able to amplify the bass even further by placing the device on a solid surface. Further, the smartphone supports DTS:X 3D Surround Sound when audio is routed via headphones. The LG G7 ThinQ also comes with a Hi-Fi Quad DAC to improve the audio output on headphones even further.

The LG G7 ThinQ is expected to be powered by a Qualcomm Snapdragon 845 SoC with 4GB RAM. It may offer 64GB of storage. It was spotted on benchmarking website AnTuTu, where it scored 2,52,473, which is in the flagship range. Renders of the phone also suggest that the Lg G7 ThinQ may offer a dedicated physical button to bring up Google Assistant. It should be noted that the device’s predecessor, the LG G6 was one of the first smartphones to offer support for the Google Assistant.

Speaking of the LG G6, the company announced that it has started rolling out the Android Oreo update for the the phone this week. The update would bring AI-features that were first seen in the Lg V30S ThinQ. The update would also bring Picture in PIcture (PiP) mode, and support for high resolution LDAC, which the company says can minimise sound source loss. The update would also bring improvements in speed, battery, basic performance, and more. The company also said that it would roll out the Oreo update to the LG V20 and the LG G5. However, it is not yet known when it would start rolling out the update to these two phones.