LG G6 launching in the US on April 7: Report 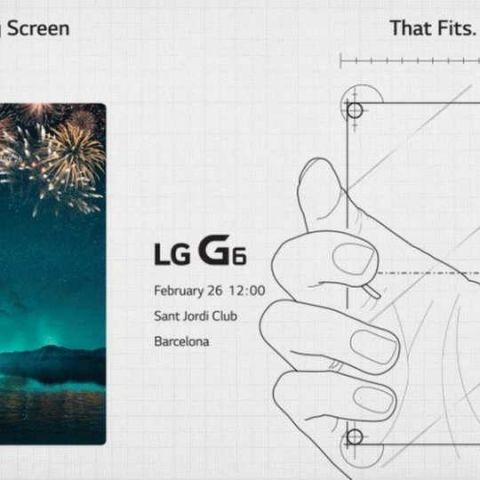 LG G6 is reportedly coming to the US on April 7, more than a month later its release at MWC 2017. LG will announce the device at Mobile World Congress on February 26 and according to planning material obtained by VentureBeat, the smartphone will go on sale starting March 9 in South Korea.

LG G6, like all other flagships launching in 2017, will dedicate larger portion of its face to the display. The smartphone is expected to pack a 5.7-inch QHD+ display with a resolution of 2880 x 1440 pixels and 18:9 aspect ratio. The panel from LG Display is being called as 'Full Vision' and new MWC teaser has a tagline "Big Screen That Fits."

LG G6 will feature a metal and glass unibody design with textured back and IP68 water and dust resistance. The smartphone is likely to be powered by Qualcomm Snapdragon 821 processor and will be the first non-Pixel smartphone to support Google Assistant. Like its predecessor G5 and V20, LG G6 will feature dual rear camera setup with one standard lens and another dedicated lens for wide-angle shots. The smartphone is also expected to sport a new front camera coupled with iris scanner.

As far as pricing is concerned, LG G6 is tipped to be priced in the same range as that of Google Pixel and Apple iPhone 7 range. With Samsung Galaxy S8 not expected to launch before March 29, LG is also getting a headstart over it arch rival in the flagship smartphone market.