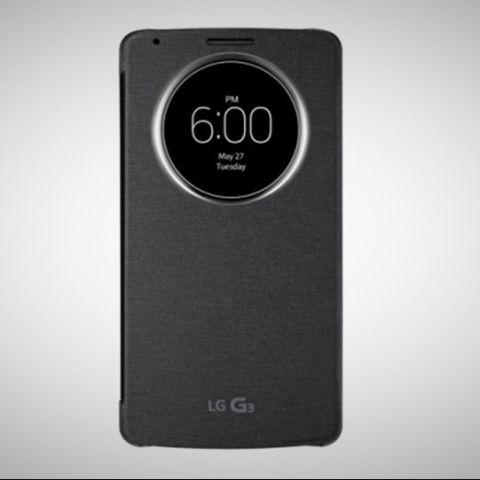 LG has introduced the official case for its forthcoming flagship smartphone, G3. The official LG G3 case, called the QuickCircle Case, features a circular window on the flip, which lets users access to key features of the smartphone such as time, place calls, send text messages, take photos etc without needing to open the cover.

LG’s QuickCircle Case will be available in five colours: Metallic Black, Silk White, Shine Gold, Aqua Mint, Indian Pink. According to the company, the new case has been designed to protect the side edges of the G3 and give a “grip-ability” while maintaining the G3's original sleek design.

The new QuickCircle Case is compatible with wireless charging. LG will be releasing a software development kit (SDK) will be available next month to allow developers to customize the LG G3 smartphones to perform customized functions with the new case.

“The smartphone ecosystem is constantly evolving — no longer are cases just for protection from the elements and bumps and drops,” says Dr. Jong-seok Park, president and CEO of the LG Electronics Mobile Communications Company. “They’re the perfect accessory to build in extra features that add more value to a mobile device. With QuickCircle Case, we’ve exceeded the baseline by making it customizable to better fit users’ needs.”

LG is set to introduce its next flagship on May 27, though details including specifications of the smartphone have already leaked online. Rumoured specs of the smartphone include a 5.5-inch Quad HD display, 13MP rear camera, quad-core Snapdragon 801 processor, and 3GB of RAM.

Check out the video below to learn more about LG's QuickCircle Case: