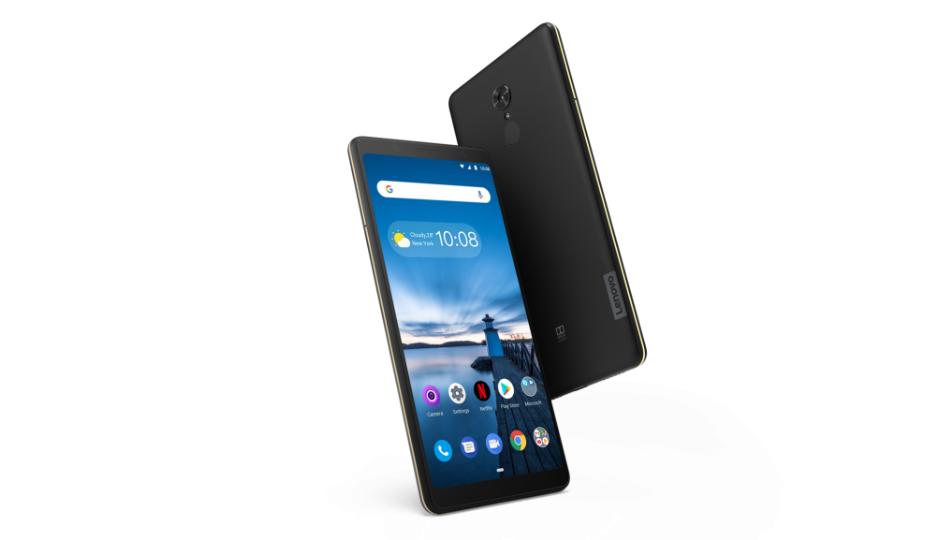 Lenovo has launched the Tab V7 in India, a 7-inch phablet (smartphone + tablet) device at a starting price of Rs 12,990. The Tab V7 sports a 6.9-inch display, 5180mAh battery, and 4G VoLTE connectivity. The Lenovo Tab V7(₹ 15499 at amazon) is set to go on sale on Flipkart starting August 1. It will eventually be available on other channels, including Amazon.in and Lenovo.com. It will also be available through offline retailers, such as Croma and Reliance Digital.

The Tab V7 will be sold in two variants: one with 3GB RAM + 32GB storage (for Rs 12,990) and another with 4GB RAM + 64GB storage (for Rs 14,990). Onboard storage can be expanded up to 128GB using a microSD card. The display is a 6.9-inch IPS LCD panel with an 18:9 aspect ratio and Full HD resolution (1080 x 2160 pixels). Lenovo claims the device has a screen-to-body ratio of 81 percent and a slim build. Measuring 7.89mm in thickness and weighing in at 195g, Lenovo's new phablet also features Dolby Audio through its two front-facing speakers.

Lenovo says that the Tab V7's 5180mAh battery is good for up to 10 hours of local video playback and browsing, and up to 30 hours of talktime. The Lenovo Tab V7 has a single 13MP camera on the back and a single 5MP camera on the front, with night shot and panorama modes in the default camera app along with HDR capability. Though it has a fingerprint scanner on the back panel, the tablet supports face unlock too. The Tab V7 is powered by the Qualcomm Snapdragon 450 mobile platform with an Octa-core processor and runs Android 9 Pie right out of the box.

“Tablet market is showing signs of recovery, driven by the potential demand from sectors like Government, education, banking and finance and as the market leader, we are well positioned to lead this growth,” commented Rahul Agarwal, CEO and MD of Lenovo India in the company's press release. Lenovo's belief in the tablet market appears to be contrary to Google's, which recently confirmed its decision to stop making tablets altogether and instead focus on laptops. You can read more about that here.