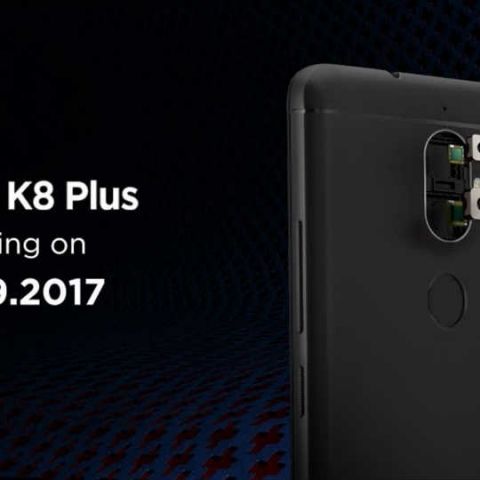 Lenovo will launch the K8 Plus, its latest addition to the K8 series at an event in New Delhi today. The launch is expected to begin at 11.30AM IST and the live stream will be available via company's YouTube channel. Lenovo India has been teasing the handset on its social media channels for the past few weeks and has confirmed that it will be Flipkart exclusive.

The Lenovo K8 Plus will be the second device, after the K8 Note, to ditch the Vibe UI in favour of a stock Android experience. At the launch of K8 Note last month, Lenovo detailed how stock Android offers improved performance and uses much fewer resources than the custom interface offered by most Android device manufacturers. The teasers indicate that the K8 Plus will sport a vertically stacked dual rear camera system and a fingerprint scanner at the back.

There is little known about the device's specifications but a GeekBench listing suggests it will be another budget offering from the company. The handset is expected to be powered by MediaTek's Octa-core Helio P25 chipset clocked at 1.7GHz and offer 3GB RAM, 32GB storage. It is likely to feature a 5.5-inch Full HD LCD display and microSD card slot for expandable storage.

The teaser also shows a dedicated media button and the device is expected to house a 4,000mAh battery. Lenovo and Motorola combined are currently the fifth largest smartphone brand in the country and with K8 Plus, the company would be hoping to catch up with Xiaomi in the offline smartphone segment. The company might pitch stock Android and dual cameras the USP of the device.