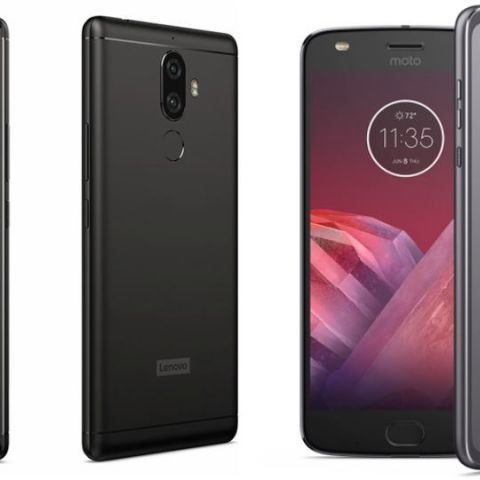 It seems like Lenovo is in the process of updating two of its smartphones to Android Oreo - the Lenovo K8 Note and the Moto Z2 Play. Updates for both are being rolled out via an OTA package, and should be available to all users over the course of the next few days. Users can manually check for updates by heading over to the Settings menu of their phones. It should also be noted that the update is for Android Oreo v8.0, not v8.1.

The Oreo update for the Lenovo K8 Note brings with it the February security patch as well as improvements to network and calling. Other additions include improvements to temperature, consumption performance and general stability improvements. In a post on its official forum. Lenovo has warned users that updating the phone may initially cause heating and excessive battery drain. “The upgrade itself uses a good deal of power, and it continues to use power over the following hours as all of your apps and systems update. This is perfectly normal and can lead to temporarily shortened battery life and higher temperatures. Our research shows that it can take up to a week or 10 days before battery life stabilizes after an OS upgrade. Please do not draw conclusions about your battery life soon after it upgrades,” the company writes in the post.

The Android Oreo most the Moto Z2 Play was spotted by a user on XDA Forums, who posted a screenshot of the update. The screenshot suggests that the update would change the version to OPS27.76-12-25. The changelog state that besides the Oreo update itself, it would bring general stability improvements and security updates till April.

To recall, the Lenovo K8 Note was launched in India back in August last year. The device was launched with Android Nougat v7.1.1. The device sports a 5.5-inch Full HD display and is powered by a MediaTek Helio X23 deca-core processor. At the back is a dual-rear camera setup with a 13MP + 5MP cameras, while at the front is a 13MP unit. The device is equipped with a 4000mAH battery and is available in two variants. 4GB RAM with 64GB storage, and3GB RAM with 32GB storage. You can read our first impressions of the phone here.

The Moto Z2 Play was launched in India back in June last year with Android Nougat. The phone sports a 5.5-inch Full HD display and is powered by a Qualcomm Snapdragon 626 SoC. At the back of the phone is a dual-rear camera setup with two 12MP dual-pixel cameras, while at the front is a 5MP unit. The phone will be available in 4GB RAM and 64GB of storage. The phone also support microSD cards of up to 256GB and has a dedicated slot for it. Since this is a part of the company’s Z series of devices, the Moto Z2 Play is compatible with all Moto Mods. You can read our review of the phone here.