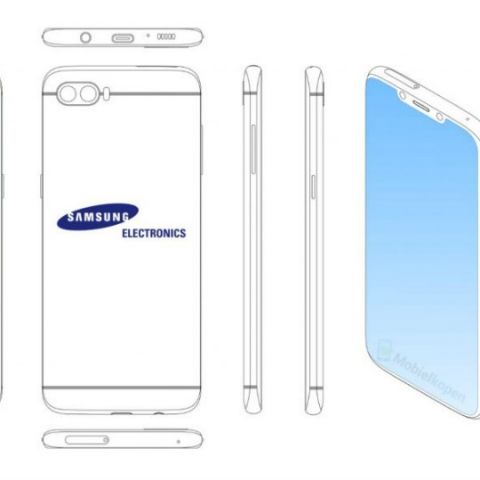 After holding out for more than a year, Samsung might be the latest Android phone-maker to embrace the notch. The Korean giant had boldly strayed away from the trend with the Galaxy S9 and the S9+, retaining the design aesthetics it perfected back with the Galaxy S8 and the Note 8. However, with the race for a bigger screen-to-body ratio heating up among players, the iPhone X’s design is right now the most accessible design. According to a leaked patent filing spotted by Mobilekopen.net, Samsung will incorporate the notch in its future smartphones. Whether it will appear on the upcoming Galaxy Note 9 isn’t clear as of this moment.

Huawei did state that the notch is a transition phase for smartphones till companies figure out how to incorporate a truly full-screen smartphone, while OnePlus CEO Carl Pei wrote a long blog post defending the notch. Nevertheless, Samsung will likely use the notch to house the front camera, earpiece and other sensors.

The patent shows the display will curve gradually along the edges with thin bezels at the bottom. There’s also no cutout for the fingerprint sensor both at the front and the back, indicating that the ‘notched’ Galaxy phone will come with the under-display fingerprint sensor combined with facial recognition.

The leaked patent schematics also show a completely redesigned rear. The dual camera is housed near the top left corner, aligned horizontally. There’s also a cutout for the headphone jack at the bottom, and no sign of a bixby button.

The leaked patent is in contrast to another patent filing by Samsung leaked back in January which showed a different approach to a truly bezel-less phone. Instead of a notch, the patent showed the display with holes drilled on the top, possibly to embed the cameras and the sensors. The patent was filed back in May 2017 and describes the concept as an “electronic apparatus with a hole area” to house an “optical sensor” and other elements. The patent also states that users will have the option to decide whether they want the content to take up the full length and width of the panel, or to restrict them with a small bezel on top and bottom of the screen.