Live images leaked on Weibo gives a glimpse at the upcoming Samsung Galaxy A8 and A8+ handsets which will feature Infinity Displays and front-facing dual cameras.

Samsung’s Galaxy A-series of phones have always been blessed with features that trickles down from its flagship phone. As the highlight of this year’s Galaxy S8 (review) and Note 8 (review) was the Infinity display and dual cameras respectively, it shouldn’t be surprising that the upcoming Galaxy A8 will sport the same. 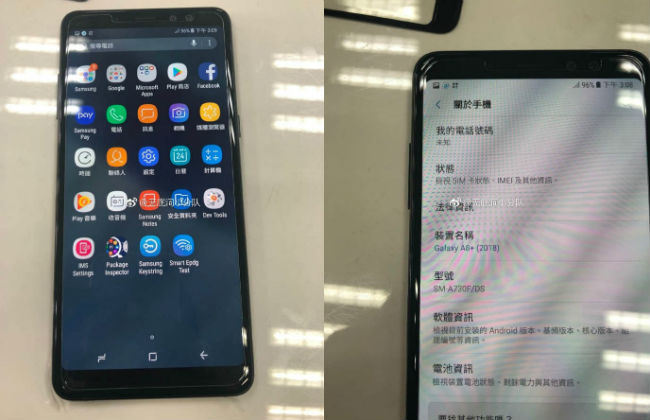 The leaked photos show a near bezel-free device that does look like Samsung’s Infinity Display with the tall aspect ratio of 18:9. However, the display doesn’t wrap around the edges like the Galaxy S8, but remains more flat against the body like the AMOLED panel on the Galaxy S8 Active.

There is also a hint of a front-facing dual camera setup in the Galaxy A8+ which would be a first if it’s indeed true. However, based on recent reports, the Galaxy A8 and the A8+ may not release in India as Samsung is reportedly streamlining its midrange offerings tailored for individual markets. The A8 and the A8+ could be made available in Germany, Poland, and Russia while most Asian markets will get the C-series phones.