The Gionee M7 Plus is expected to come with a dual rear camera setup and sport a Univisium display with an 18:9 aspect ratio 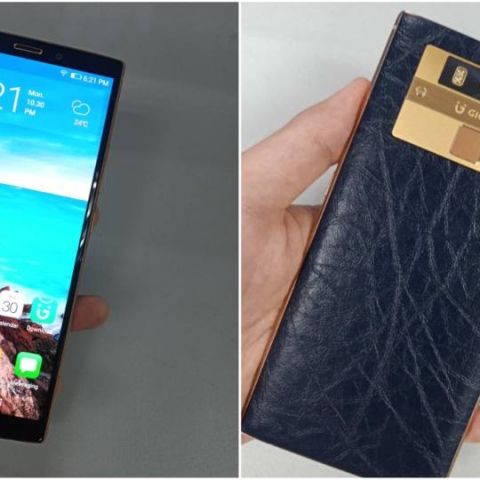 Images of Gionee’s upcoming smartphone the M7 Plus have leaked online. The leaked hands on images reveal that the smartphone may sport a taller 18:9 aspect ratio and a premium leather back. Popular tipster Evan Blass posted the images on Twitter and noted that the 6.47-inch display on the device could be Gionee’s biggest display on a smartphone till now.

The images of the Gionee M7 Plus reveal a big display with really thin bezels, but it's not completely bezel-less. It is also shown with a dual rear camera setup with the fingerprint sensor placed below it. The smartphone is missing a physical home button.

No specifications of the M7 Plus have leaked yet but some reports suggest that the phone may be launched alongside the Gionee M7 Power. The company is expected to soon launch the M7 Power in India. It is rumoured to come with 5000mAh battery and is a low-power variant of the M7 launched in Thailand last month.

The smartphone sports a 6-inch IPS LCD FullView display with a Full HD+ resolution of 1440 x 720 pixels. It is powered by Qualcomm's Snapdragon 435 chipset, coupled with 4GB RAM and 64GB of onboard storage. It also supports expandable storage up to 256GB via a microSD card slot.

The M7 Power comes with a 13MP rear camera with autofocus and an LED flash. It sports an 8MP front facing camera which can record 1080p videos at 30fps. The smartphone features a rear-mounted fingerprint sensor and runs company's Amigo 5.0 skin atop Android 7.1 Nougat. The Gionee M7 Power features connectivity options like Wi-Fi, Bluetooth, GPS, 3.5mm audio jack and a micro USB port for charging.