iPhone X’s A11 Bionic is a hexa-core processor that is able to run all its cores simultaneously. The A11 SoC also features a neural processing engine and enables the functioning of the new Face ID feature.

Apple’s iPhone X smartphone has been tested on Geekbench 4 and according to the test scores, it outperforms some of the top rival flagship smartphones, including the Galaxy Note 8, Galaxy S8+ and OnePlus 5. The iPhone X is powered by the new A11 Bionic processor. It is a six-core processor, which is able to run all its cores simultaneously. 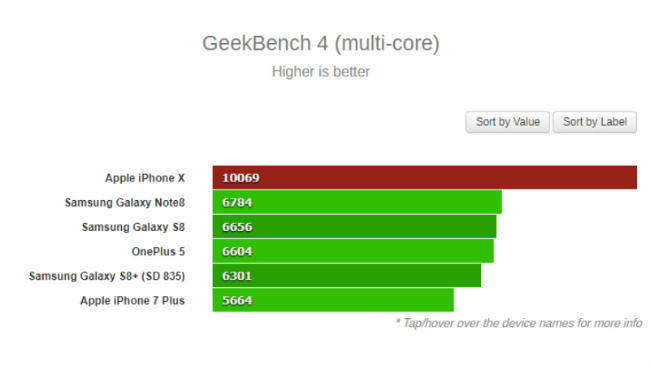 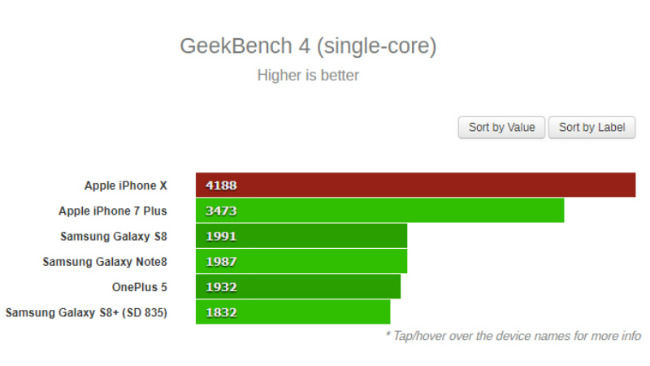 The hexa-core A11 Bionic chip powering the iPhone X is built on a 10nm node and Apple claims it delivers 25 percent faster speed on the two performance cores and up to 70 percent more performance from the four remaining cores as compared to its predecessor, the A10 Fusion processor. The A11 also incorporates a neural processing engine that can apparently handle upto 600 operations every second.

Apple’s iPhone X is coming to India on November 3 and features an edge-to-edge display and the Face ID feature, which allows users to unlock the phone just by looking at it. The smartphone sports a 5.8-Inch OLED display that Apple calls a Super Retina Display. The iPhone X sports a 12MP dual camera setup at the back and a 12MP front facing camera as well. Apple says the battery on the iPhone X will last 2 hours more than the Apple iPhone 7, thanks to a more power efficient A11 processor. The smartphone will be priced at Rs 89,000 for the 64GB variant and Rs 1.2 lakh for the 256GB version.