Apple consumers were eagerly anticipating a new update for iOS 6 sometime this week, and the company has responded with an official update to iOS 6.0.1. 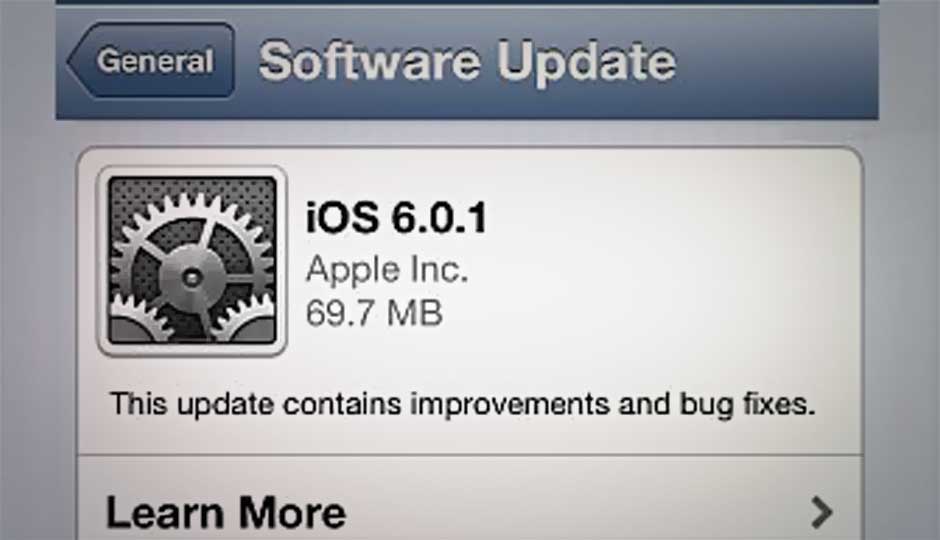 Apple consumers were eagerly anticipating a new update for iOS 6 sometime this week, and the company has responded with an official update to iOS 6.0.1. If you have an iPhone 4 or iPod Touch ready and waiting, head to your General Settings and you’ll find that an OTA software update to iOS 6.0.1 is now available. The update is 43.3 MB in size and contains eight notable fixes and improvements from iOS 6, including a solution to a well-known Passbook issue when accessing the app from the lock screen.

For those looking to jailbreak iOS 6.0.1 straight off the bat, you’ll be happy to hear that you can get it done via the latest version of RedSn0w. Simply download and install RedSn0w 0.9.15b1 (or b2/b3) and jailbreak the software easily. However, do remember that this jailbreak is “tethered”, which means that every time you switch off or restart your handset, you will have to enter jailbreak-mode all over again. Work on an untethered jailbreak is currently on, and we’ll keep you updated.

Also, this jailbreak only works with pre-A5 devices, meaning it currently supports only the iPhone 4, the 3GS, or the iPod Touch (4th generation). Trying to use this on the iPhone 5 or even the iPad 4 or the iPad Mini will probably result in you being left with nothing more than a really big and expensive paperweight.

Apple also released the Beta version of iOS 6.1 some hours ago, and you can use the same software mentioned above to jailbreak it. However, this is unlikely to be useful to most users who don’t have an Apple developer account, as access is limited to only such users, as with all pre-release versions of iOS 6.

If you are interested in giving the tethered iOS 6.0.1 jailbreak a try, you can find detailed instructions and all the necessary download files from here. However, seeing as how this is a tethered jailbreak, it might be a better idea to wait until somebody comes up with an untethered jailbreak. It shouldn’t take long, especially now that Apple has made the new OTA updates available to users.