The Huawei Y9 comes with 4GB RAM and 64GB of internal storage. It has been announced as an Amazon exclusive device and goes on sale at midnight on January 15. 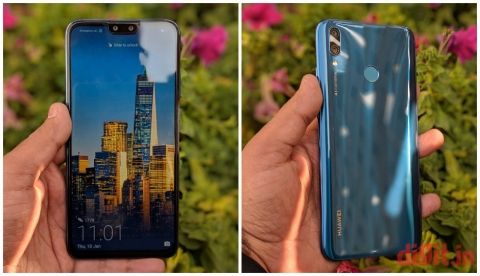 Huawei has launched its Y9 smartphone in India. The new handset was being teased by the company this week and it has finally been announced by the company at an event held in New Delhi today. The Huawei Y9 is the Chinese smartphone manufacturer’s latest offering and key highlights of the device are a large display with a notch, dual cameras on both the front and the rear and the Kirin 710 chipset. Amazon had already hosted a microsite for the device, revealing that it will be exclusive to the retailer’s platform. Additionally, the smartphone comes bundled with headphones as a launch offer.

In terms of hardware, the Huawei Y9 features a 6.5-inch LCD display with a 2340 x 1080p resolution and 19.5:9 aspect ratio. The company calls it a FullView Display panel and says that it sports a 3D curved design. As mentioned above, the handset runs on the HiSilicon Kirin 710 SoC, which is an Octa-core processor with AI Power 7.0 for handling all AI-related tasks. The phone comes with 4GB RAM, coupled with 64GB of internal storage. It also comes equipped with the company’s GPU Turbo tech that is said to enhance the graphics performance of the device, while keeping the power consumption low.

In terms of optics, the device sports dual front and rear cameras. On the back is a 13 MP + 2 MP sensor configuration that features AI Scene Detection and enables the device to capture Bokeh images. On the front are also dual sensors of 16MP + 2MP configuration. The 16MP sensor is paired with an f/2.0 aperture lens and it supports 4-in-1 pixel binning for enhanced low-light or backlighting conditions. The rear camera sports an f/1.8 aperture lens. The phone is backed by a 4000mAh battery and is said to support ‘smart power consumption optimization’ that might help with saving power

The Huawei Y9 is priced at Rs 15,990 and will be available exclusively via Amazon.in from January 15, midnight onwards. The handset comes in Sapphire Blue and Midnight Black colour models and as for launch offers, the company is offering Boat ROCKERZ 255 SPORTS Bluetooth earphones for free, as a limited period bundle. Additionally, Jio customers can also avail 100GB 4G data and benefits of up to Rs 4,450 on purchasing the smartphone.