The Taiwan-based market research firm says that Huawei could overtake Apple to become the world's second largest smartphone maker amid US-China trade war, which could drop the production by 5% in 2019. 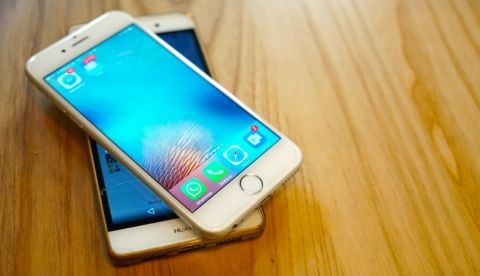 The global smartphone production volume for 2019 is expected to be 1.41 billion units, a decrease of 3.3 percent as compared to 2018, Taiwan-based market research firm TrendForce has said. It has attributed the record lower production volumes this year to the weak overall demand outlook in the global smartphone market, which is due to the absence of breakthrough features and specs withholding consumers to replace their existing devices.

“If the demand outlook becomes worse, together with uncertainties and impacts from the US-China trade war, the decline in global smartphone production may reach 5 percent in 2019. As for the global ranking of smartphone market share, Samsung would remain the market leader, while Huawei is expected to surpass Apple to become the world's second largest smartphone maker. Apple would then take the third place,” the firm said in a statement.

According to TrendForce, Samsung produced 293 million smartphones in 2018, registering a decline of 8 percent (YoY). Though its market share has been shrinking as it faces a tough competition from the Chinese brands in the lower end smartphone segment and emerging overseas markets, Samsung still aims to maintain its existing market share while actively exploring emerging markets For 2019.

The firm says that it is relatively difficult for Samsung to develop new business fields, because it has already had a complete deployment in the low, middle and high-end segments. Samsung, which has been involved in fierce price competition with China’s domestic brands, is expected to adopt more aggressive strategies this year in terms of specifications and pricing. It is also expected to remain the leading smartphone maker with a global market share of 20 percent.

Huawei may leapfrog ahead of Apple to take second spot

Thanks to a wide range of product and self-developed chips, Huawei’s production volume increased by 30 percent (YoY) to 205 million units in 2018. With its P series and Mate series, Huawei expanded its share in the premium segment of the Chinese smartphone market, where Apple used to dominate. Huawei has also successfully presented its brand in overseas markets like East Europe with its Honor models. 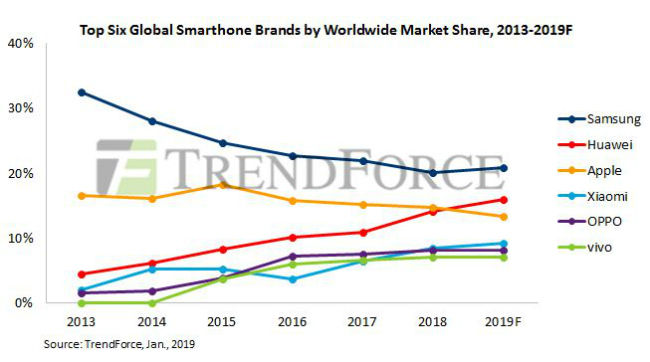 In 2019, Huawei is expected to retain its position in the Chinese smartphone market, while focusing on the expansion in emerging markets such as Eastern Europe, Brazil, and South America. According to TrendForce, Huawei has a chance to produce 225 million smartphones in 2019 to take 16 percent of the global market share, and could overtake Apple to become the world's second largest smartphone brand. Huawei is also vulnerable to the ongoing US-China trade war.

Apple could be the worst-hit casualty of the US-China trade war as it could lose its hold in major markets like China. As for Apple’s performance in 2018, the sales of new iPhones turned out to fall short of expectation, resulting in lower shipments of iPhones in second half of 2018 - about 7 percent less than in the second half of 2017. As the result, the production volume of Apple in 2018 declined by 3 percent (YoY). In other words, Apple shipped 10 million units less units in China in 2018 than in 2017, due to the ban on the sale of some iPhone models and the sky-high prices of the new iPhones.

Apple is expected to continue this trend in 2019 and face the longer replacement cycle of smartphones and its weakening sales in the premium segment of the Chinese market. TrendForce expects that Apple’s production volume for 2019 would decrease to 189 million units, and the market share will reach 13 percent - down from 15 percent in 2018. “If the tension in US-China trade becomes worse this year, Apple’s production volume may decline further,” the firm noted.

Xiaomi, Oppo, and Vivo are said to retain the fourth, fifth and sixth positions respectively in the global smartphone brand ranking for 2019. Xiaomi registered 123 million units in smartphone production for 2018 - 32 percent more than that for 2017. For 2019, Xiaomi would continue to focus on research and development, as well as aim to renew its brand image with new positioning for its sub-brands, including Redmi, POCO, among others. Xiaomi’s smartphone production for 2019 is expected to be 129 million units, says TrendForce.

While Oppo launched online brand Realme in Indian market, Vivo signed a six-year sponsorship agreement with FIFA World Cup to enhance its international popularity. Oppo registered a production volume of 120 million in 2018, and aims to keep the volume flat in 2019, with an estimated market share of 8 percent. Vivo produced a total of 104 million smartphones in 2018 and in 2019, the volume could fall to less than 100 million representing a global market share of 7 percent.