Richard Yu, CEO of Huawei's Consumer Business Group, shared an image on his official Weibo account that shows a blurred watermark suggesting it is taken from the upcoming P30 Pro with a quad-camera setup

The P30 Pro will come with a quad camera setup on the back, Richard Yu, CEO of Huawei Consumer Business Group, has confirmed through a camera sample. The executive clicked the photo of the moon and posted it on his official Weibo account to celebrate the Lantern Festival. however, he posted the image with a half-blurred watermark suggesting that the photo is clicked through Huawei’s next flagship.

Readting through the un-blurred sections suggests that the photo is clicked via the P30 Pro with a quad-camera setup. Moreover, there is no other Huawei phone that sports a quad-camera. The word “Quad” can be clearly seen on the watermark despite some smudging. Further, the watermark also suggests that Huawei will use Leica optics in the P30 Pro. The smudging of the watermark is a little unusual because generally this feature can easily be turned of in the camera settings. 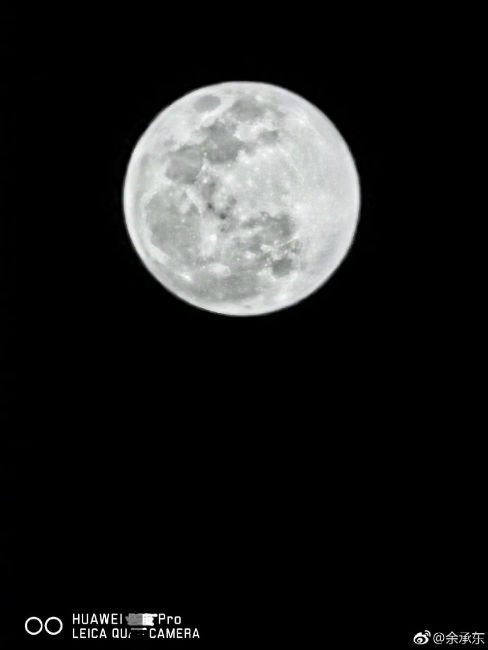 Recently, case renders published by Spigen suggested that top-most variant of the P30 lineup, which could be the P30 Pro, may come with four cameras on the back. This fact was supported by the renders of the phone that were shared by OnLeaks. Currently, the Samsung Galaxy A9 (2018) is the only phone that comes with four cameras on the back. The video also tips that the phone will sport an in-display fingerprint sensor, and will ship with a 3.5mm audio jack on the top edge.

The Huawei P30 Series is slated to come with the Kirin 980 SoC under the hood coupled with a nearly bezel-less display with a waterdrop notch on top. It could be announced in 6GB/8GB RAM models with storage options of 128GB/256GB/512GB. A video based on several leaks suggested that the phone will come with a 6.1-inch QHD OLED display with a 19.5:9 display aspect ratio. The phone was earlier rumoured to launch at MWC 2019 in Barcelona later this month. But fresh rumours now suggest Huawei is planning to launch the phone in Paris next month.