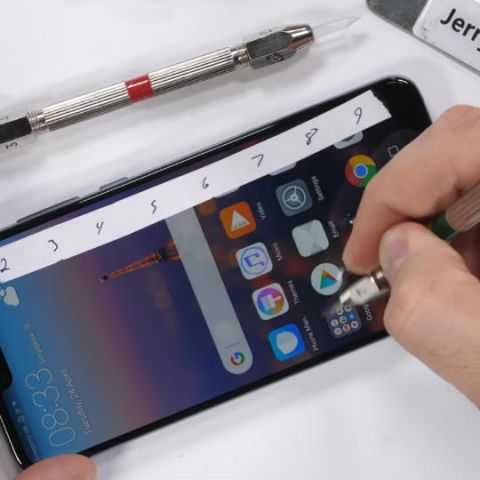 JerryRigEverything on YouTube is well known for performing durability tests on latest smartphones. Now, the YouTuber Zack has put the triple-camera Huawei P20 Pro through its paces to see if it can survive the scratch, burn and bend tests or not. The video starts with a quick unboxing of the phone, after which it goes through Mohs scratch test of checking the screen’s hardness and at what level it scratches. To put things into perspective, plastic scratches at level 3, tempered glass at level 6, whereas sapphire and diamond screens scratch at level 8 and 10 respectively. The screen on the P20 Pro starts showing scratches at level 6, with visible deeper grooves at level 7. Other flagship smartphones like the Samsung Galaxy S9, OnePlus 5T, iPhone X, and the iPhone 8 also scratched at the same Level 7, but the sapphire screen on the HTC U Ultra scratched at Level 8.

In the bend test, the smartphone’s build quality fails to meet expectations. With the first flex, the device’s screen cracks with multiple fractures, which seem to emanate from the scratches formed during the initial scratch test. Zack speculates that if the scratches weren’t there in the first place, the screen might not have cracked. However, many other smartphones, which have undergone the same test passed without a hitch, even after the initial scratch testing. On the Huawei P20 Pro (review), there is no apparent damage to the AMOLED display underneath and the glass rear panel doesn’t give under a second bend test.

Zack also uses a razor blade to check whether the P20 Pro's circular earpiece, front-facing camera and the fingerprint sensor are scratched. However, none of them are affected as they sit under the glass on the front. It’s the same for the glass rear panel where the Huawei and Leica branding, the triple cameras and the dual-tone LED flash are unscathed by the razor blade. As the device's frame is built using metal, it gets scratched quite easily.

In the flame test, it took about 20 seconds for some pixels on the smartphone’s display to permanently turn white after being exposed to the flame. There was a visible white spot even after the display was turned off. This is more or less the same for a majority of smartphones which have undergone the test.