Huawei Nova 7 Pro, Nova 7, Nova 7 SE and MatePad 10.4 have been launched in China. The latest Huawei phones support 5G networks, 40W fast charging and pack 64MP cameras on the back. The Pro variant has a dual punch-hole cutout for selfie cameras while the 7 and 7 SE make do with a single selfie camera on the front.

Alongside, Huawei also unveiled the MatePad 10.4 that supports M-Pencil and seems to be an affordable version of the MatePad Pro. Let’s take a brief look at the specifications, features and prices of the Nova 7 series and the MatePad 10.4.

All the products go on sale in China from April 28. Details about availability in other regions are awaited.

Huawei Nova 7 Pro features a 6.57-inch Full HD+ (2340 x 1080 pixels) resolution display that uses an OLED panel with dual punch-hole cutout on the top-left corner. This gives the screen a 19.5:9 aspect ratio with the display curving around the edges. There’s an in-display fingerprint on the Pro and the regular Nova 7 for easier unlock.

The phone is powered by Kirin 985 chip that comes with 5G support and an octa-core CPU paired with Mali-G77 GPU. This is paired with 8GB RAM and upto 256GB storage options to choose from. The phones run on EMUI 10.1 that’s based on Android 10 AOSP and the company’s proprietary services.

All the thee phones feature the same primary 64MP camera with an f/1.8 aperture and support EIS. The Nova 7 Pro has a secondary 8MP periscope camera with upto 5x optical zoom and OIS support. This is followed by an 8MP ultra-wide-angle lens and a 2MP macro camera.

On the front, there’s a primary 32MP camera coupled with an 8MP ultra-wide lens. The rear cameras on all three phones can record upto 4K UHD videos and 720p slow-motion videos at 960fps.

All three phones come with the basic set of sensors and connectivity features including stereo speakers and Type-C port for charging. The phones are fitted with a 4,000mAh battery that supports 40W fast charging and the company claims the phone can go from 0-70% in thirty-minutes tops.

Huawei Nova 7 features a 6.5-inch OLED screen with a Full HD+ (2400 x 1080 pixels) resolution and has a single punch-hole cutout for the selfie camera. This gives it a 20:9 aspect ratio and unlike the Pro variant, the display doesn’t wrap around the edges on this model.

The phone is powered by the same Kirin 985 5G processor as the Nova 7 Pro and comes in the same set of RAM and storage variants. The primary camera is also the same, though the secondary camera is a slightly toned down telephoto lens with 3X optical zoom. On the front, there’s a 32MP selfie camera while the rest of the specifications remain the same.

The Nova 7 SE features a 6.5-inch display with Full HD+ resolution and 20:9 aspect ratio due to the punch-hole cutout on the front.  It is powered by the Kirin 820 chipset that supports 5G networks, with an octa-core CPU and Mali-G57 GPU.

The phone has 8GB RAM with upto 256GB storage options and is further expandable to 256GB via hybrid SIM slot.

Huawei Nova 7 SE has the same set of cameras as on the regular Nova 7 with the exception of a single 16MP front-facing camera. The fingerprint sensor is also side-mounted on the 7 SE, while the rest of specifics remain the same. 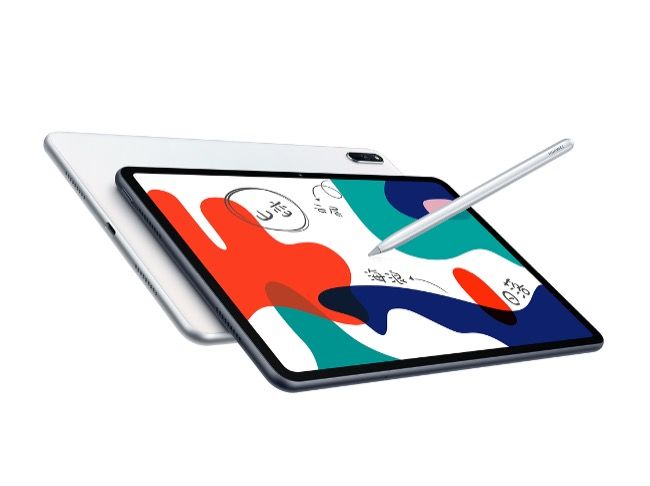 The new MatePad has a metal unibody design and features a 10.4-inch display with a 2000 x 1200 pixels resolution and is powered by Kirin 810 processor. The tablet has two 8MP cameras, one on the rear and one on the back. The tablet is 7.35 mm thick and weighs around 450 grams.

The tab runs on EMUI 10.1 but sadly doesn’t support Google services. The tab also supports the M-Pencil stylus that lets users take advantage of the large screen estate. Additionally, the tab is fitted with a set of four speakers tuned by Harman Kardon and four microphones. It’s available with upto 6GB RAM and 128GB storage options to choose from and comes in Wi-FI-only or Wi-Fi + LTE support.