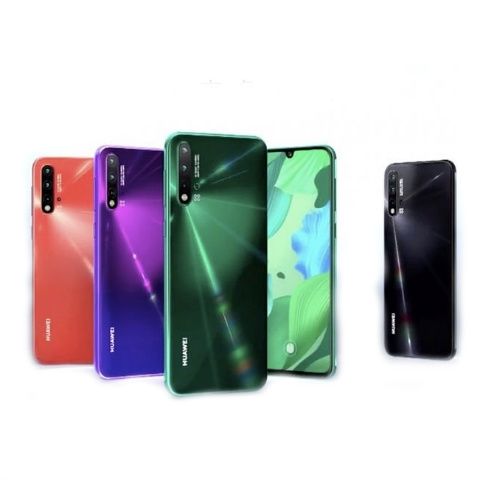 Huawei has launched the Nova 5 Pro, Nova 5 and Nova 5i.

Huawei has launched the new Nova 5 series of handsets in China. As expected, the company has also unveiled its second 7nm processor, the Kirin 810, powering one of the three smartphones launched in the new series which includes -- Huawei Nova 5, Nova 5 Pro and Nova 5i.
All three smartphone sport a quad camera setup at the back. EMUI 9 based Android 9 Pie features on all three devices. Here’s a breakup of everything Huawei announced.

On the other hand, the Nova 5 Pro sports Huawei’s flagship Kirin 980 chipset.

In terms of other specs, the Huawei Nova 5 and Nova 5 Pro feature a 6.39-inch full HD+ OLED display, with support for DCI-P3 and DC dimming.

The Nova 5 comes with 6GB RAM and 128GB expandable storage, while the Nova 5 Pro gets 8GB RAM and 128/256GB expandable storage. The Nova 5 and Nova 5 Pro share the same quad rear camera setup with a 48MP Sony IMX586 primary sensor, a 16MP superwide lens, a 2MP depth lens and a 2MP macro lens. A 32MP camera rests within a waterdrop notch on the front of both devices. Both phones support features like super night mode, AI Beautification, scene recognition and more.

Both phones are powered by a 3500mAh battery, paired with 40W fast charging. Both come preloaded with EMUI 9 based Android 9 Pie.

For connectivity, the Nova 5 and Nova 5 Pro feature a USB Type-C port as well as a 3.5mm headphone jack.

The Nova 5 Pro has launched in Bright Black, Dilemma Forest, Midsummer Purple, and Coral Orange colours. The Nova 5 gets all the same colours except the Coral Orange.

The Nova 5i is the cheapest in the series and gets a Kirin 710 processor. The phone sports a 6.4-inch LCD punch-hole LCD display. It gets 6GB RAM and 128GB storage, as well as a variant with 8GB RAM and 128GB storage. A 4000mAh battery powers up the device, paired with 10W charging. Nova 5i also gets EMUI 9 based on Android 9 Pie.

A quad camera setup makes its way to the back of the phone with a 24MP primary lens, a 16MP ultra-wide lens, a 2MP depth sensor and a ToF sensor.

The phone has been made available in Bright Black, Dilemma Forest, Midsummer Purple colours.

There’s no word on the global availability of the devices.