Huawei Nova 3i prices revealed ahead of launch as phone gets listed on AliExpress, Vietnam's Gio Di Dong 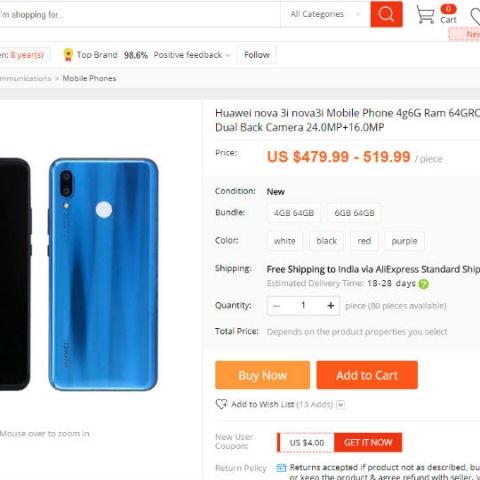 Last week, Huawei launched its gaming-centric smartphone Nova 3 in China with its proprietary GPU Turbo technology and four cameras. A few days later it was confirmed that Huawei will launch the Huawei Nova 3 gaming smartphone in India on July 26 as an Amazon exclusive device. A report also claimed that the Chinese conglomerate may launch a rumoured Huawei Nova 3i phone which is expected to be a toned-down version of the Nova 3. Now, a listing on AliExpress has not only confirmed the existence of the Nova 3i, it also revealed the price of the smartphone.

According to the listing, the Huawei Nova 3i has two variants: 4GB/64GB storage and 6GB/64GB storage. The 4GB+64GB variant is priced at $479.99 (approx 32,900) and those who want to buy the 6GB 64GB variant, will have to shell out $519.99 (approx 35,600). Interestingly, the photos posted along with the listing shows a phone without a notch. Earlier reports have claimed that Huawei Nova 3i will come with a notch. In a separate leak posted by Slashleaks, a flyer from Vietnam's mobile retail chain Gio Di Dong shows that the Huawei Nova 3i will be made available in Vietnam for VND 11,990,000 (approx Rs 35,300). If you notice, the price mentioned in both sources is almost the same, and in this flyer, the phone displayed has a notch. 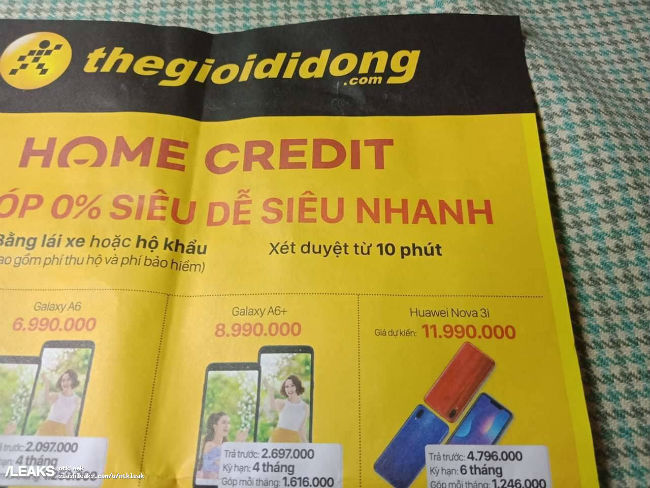 Now coming to the specs, the Nova 3 smartphone has a 6.3-inch Full HD+ LCD display with an aspect ratio of 19.5:9 and a notch. It is powered by a Kirin 970 SoC with four Cortex-A73 cores clocked at 2.4 GHz for performance tasks and another four Cortex-A53 cores. It will come with 6GB RAM and 128GB on-board memory. In the camera department, the phone sports a dual-camera setup with a 16MP sensor combined with another 24MP secondary sensor. Huawei Nova 3 also has dual-cameras on the front - 24MP + 2MP - with the face unlock feature. The phone house a 3,750mAh battery with Huawei’s Super Charge technology and runs on Android 8.1 Oreo.

Meanwhile, the Huawei Nova 3i is expected to feature the Kirin 710 chipset. We have already mentioned above that it is available in two variants. It could come with a 16MP + 2MP sensors on the back, and a 24MP sensor combined with a 2MP sensor on the front. The Nova 3i is said to feature a 3,340mAh battery. The listing on AliExpress shows the phone is available in White, Black, Red and Purple colours.