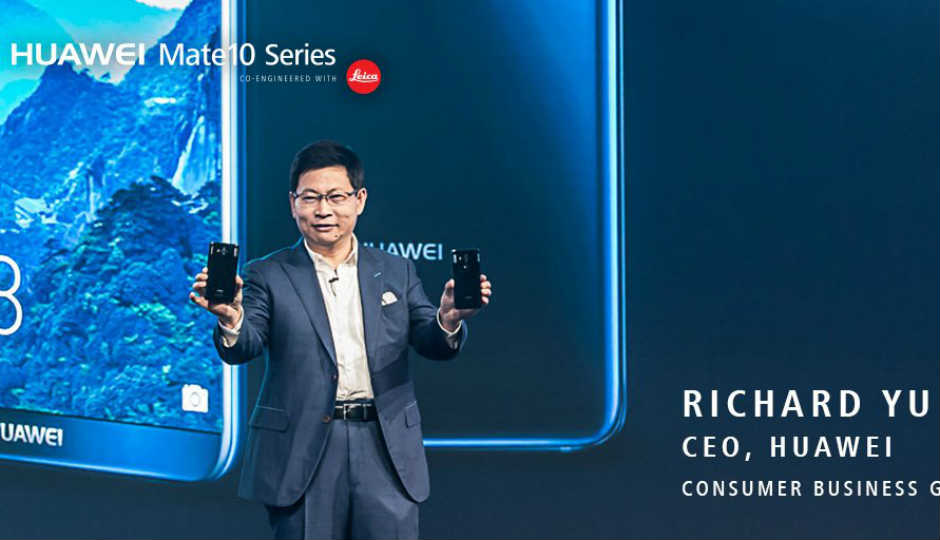 Huawei has finally announced the launch of its flagship Mate 10 series smartphones at an event in Munich. The Mate 10 and Mate 10 Pro is Huawei's devices that will compete against Apple's iPhone 8, iPhone X, Samsung Galaxy Note8 and LG V30.

Huawei, the leader in Chinese smartphone market has managed to beat Apple and gain second spot globally and with the new Mate 10 Series, the company hopes to strengthen its place in the premium smartphone segment. The Mate 10 and Mate 10 Pro are powered by company's new Kirin 970 chipset, which includes a dedicated Neural Processing Unit (NPU) for handling AI related tasks. The company is pitching these as the Real AI Phone with 25 percent improvement in performance over its predecessors. Both the models feature metal and glass design with a reflective band running across the camera module that mimics the design of Google's Pixel series.

With Mate 10, Huawei is also highlighting its partnership with Leica in the camera department offering dual camera setup with improved optics. The Mate 10 and Mate 10 Pro sport dual rear camera setup with a 12MP primary RGB colour sensor and secondary 20MP monochrome sensor. The Mate 10 series is only the second smartphone after LG V30 to feature an image sensor with wider f/1.6 aperture. The new wider f/1.6 aperture lens is a massive improvement over outgoing Mate 9, which had a f/2.2 aperture. The primary camera also supports optical image stabilisation coupled with laser autofocus and phase detection autofocus. Other improvements include enhanced high dynamic range, AI-supported 2x digital zoom, bokeh effect and support for 4K video recording. Both the models get an 8MP selfie camera.

Huawei Mate 10 gets a front-mounted fingerprint sensor while the Mate 10 Pro sports a rear-mounted fingerprint sensor. The handsets run EMUI 8.0 based on Android 8.0 Oreo and are backed by a 4000mAh battery. Huawei Mate 10 and Mate 10 Pro is IP53 and IP67 water and dust resistant. Huawei is also introducing Porsche Design Mate 10 Pro with 6GB RAM, 256GB internal storage and ceramic finish. All three models also support new smart screen mirroring function that allows users to their phone into a PC by using HDMI cable. The function is similar to Samsung's DeX but doesn't need a dock.

Huawei says Mate 10 Series supports new TUV Safety Certified SuperCharge function that charge the device to 58 percent in 30 minutes. Huawei Mate 10, Mate 10 Pro and Porsche Edition is priced at €699, €799 and €1395 respectively. The smartphones will be available from next month and India is not likely to get these devices. With Mate 10 Series, Huawei is trying to be conservative on specifications and rather trying to deliver a smartphone that is prepared for future with AI processing and support for 4.5G networks.