The smartphone is also equipped with the company’s latest Edge Sense 2.0 feature and comes with pressure-sensitive buttons. 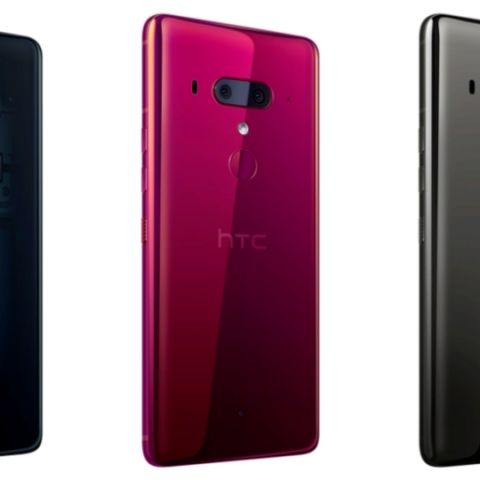 After numerous leaks, speculations and some official reveals, HTC has launched its U12+ smartphone, which is expected to be the company’s only flagship smartphone for this year. The U12+ is the company’s biggest device yet with a 6-inch Quad HD+ display with 18:9 display aspect ratio. It comes in three colour variants, Translucent Blue, Ceramic Black and Flame Red. Same as its predecessor, the Translucent Blue colour model features a translucent rear panel which gives a glimpse at the device’s interior. It also comes equipped with the company’s Edge Sense 2 feature which helps users in handling one-handed interaction for capturing photos, interacting with the voice assistant, and more. In the US, it is priced at  $799 (Rs 55,000 approx) for the 64GB variant, whereas its 128GB version costs $849 (Rs 58,000 approx). There is no word on when the smartphone will be launched in India or what it could be priced at.

The HTC U12+ also comes with new pressure-sensitive buttons with a new haptic feedback experience. There is a fingerprint sensor on the rear and it is IP68 rated water and dust resistant as well. Being a 2018 flagship device, the smartphone is powered by the Qualcomm Snapdragon 845 SoC and comes with 6GB RAM and options of 64GB and 128GB UFS 2.1 internal storage. It is running on HTCSense UI, based on Android 8.0 Oreo, and is powered by a 3500mAh battery that supports Quick Charge 3.0. HTC claims that the device’s battery can be charged up to 50 percent in 35 minutes and it can deliver up to 23.8 hours of talk time on the 3G/4G network.

In terms of optics, the U12+ comes with dual cameras on both the rear and the front. On the rear is a 12MP sensor with HTC UltraPixel 4 tech and f/1.75 aperture, along with another 16MP  telephoto camera with f/2.6 aperture lens and that has a pixel size of 1.0µm. On the front rests an 8MP+8MP camera setup with a f/2.0 aperture lens, which can capture ‘natural Bokeh’ shots. The rear camera of the device is capable of handling up to 2x optical zoom and 10x digital zoom, and it also comes with Optical Image Stabilization (OIS) and Electronic Image Stabilization (EIS).

As tipped earlier, the HTC U12+ is also equipped with the company’s BoomSound Hi-Fi edition audio and supports aptX HD for delivering high-resolution 24-bit audio via Bluetooth.