HTC U12 Plus design, specs leak ahead of May 23 launch 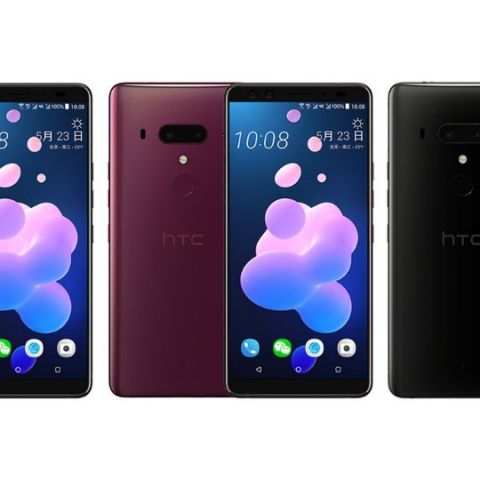 An image revealing the HTC U12 Plus in three colour variants has leaked online, along with its complete specs.

HTC is expected to launch its flagship HTC U12 Plus smartphone on May 23 and it seems like the entire spec sheet of the upcoming smartphone has leaked online. Frequent tipster Evan Blass has posted images of the alleged smartphone complete with its specification sheet. Going by the image, the HTC U12 Plus could come in three colours variants namely Black, Burgundy Red as well as Translucent Black. Similar to its predecessor, the HTC U11, the device’s rear panel gives a glimpse at the hardware underneath. It could also feature a taller 18:9 display and as a result, the fingerprint sensor is moved to the rear of the device. The spec sheet indicates that the company is using a ‘Liquid Surface design’ and the smartphone could be equipped with touch-sensitive buttons for a “new touch feedback experience.”

Being a 2018 flagship, the HTC U12 Plus is expected to be powered by the latest Qualcomm Snapdragon 845 SoC and this is reiterated in the leak. The sheet also tips at the use of 6GB RAM on the device and that it could come in 64GB and 128GB internal storage variants, but the options could vary by region. The smartphone might feature a 6-inch Quad HD+ Super LCD 6 display with a 2280 x 1440 pixels screen resolution and might come with Corning Gorilla Glass protection, along with support for HDR10, DCI-P3 and sRGB. It is expected to launch running on Android Oreo with HTC Sense. The company is also expected to unveil an updated version of its Edge Sense feature, called Edge Sense 2. Edge Sense allows users to squeeze the sides of the device and access apps or toggle certain settings.

Coming to the optics, the smartphone is expected to feature a dual-camera setup with a 12MP wide-angle lens with 1.4-micron pixel size, f/1.75 aperture and a 16MP telephoto lens with 1.0-micron pixel size and f/2.6 aperture. The spec sheet suggests that the rear camera supports UltraSpeed Autofocus 2 (phase detection + laser autofocus), up to 2x optical zoom, 10x digital zoom, Pro mode, Optical Image Stabilization (OIS), dual LED flash, AR stickers, and face detection as well. One would also be able to capture 4K videos at 60fps, along with slow-motion video capturing at 240fps.

On the front, it might feature a dual 8MP camera setup with f/2.0 aperture lens and 1.12-micron pixel size. Going by the spec sheet, the device’s front camera could be equipped with an 84 degrees wide-angle lens and might support Bokeh mode, AR stickers, ‘HDR Boost’, Face Unlock, and more features.

The dual-SIM smartphone could be backed by a 3500mAh battery with Qualcomm Quick Charge 3.0 support, which is said to charge the device up to 50 percent in 35 minutes. In the audio department, the HTC U12 Plus might feature the company’s USonic technology with active noise cancellation, HTC BoomSound Hi-Fi edition, Qualcomm aptX HD, Hi-Res Audio, LDAC for delivering up to 32-bit wireless audio via Bluetooth and more. In terms of connectivity, the device might come with a USB Type-C port, support dual LTE and Bluetooth 5.0.