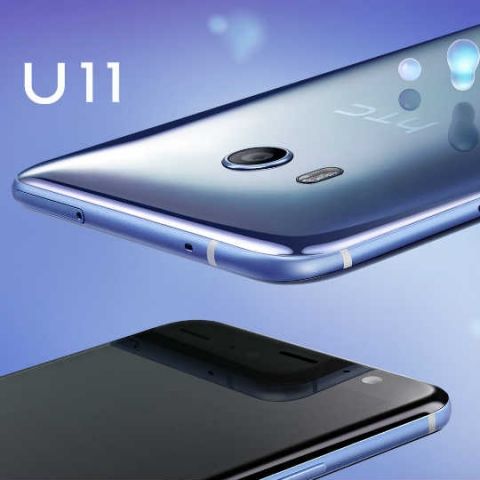 HTC U11, the 2017 flagship smartphone with unique Edge Sense feature will launch in India today. HTC is calling its latest flagship as squeezable smartphone and it boasts of the highest rated smartphone camera.

HTC U11 is the second flagship smartphone from the Taiwanese giant for this year. The U11 bridges the name scheme followed by the company with HTC 10 and U Ultra flagship smartphones. The handset features the same liquid surface finish with metal and glass unibody design first seen on U Ultra. Powering the device is Qualcomm's Snapdragon 835 chipset, which makes it direct competitor to Samsung's Galaxy S8 and Sony Xperia XZ Premium.

The HTC U11 retains the conventional smartphone form factor with 5.5-inch Quad HD Super LCD display. It comes in two storage options: 4GB RAM variant with 64GB storage and 6GB RAM model with 128GB storage. The company has already listed the 128GB storage variant on its online store. On the camera front, HTC U11 sports a 12MP optically stabilised rear camera with f/1.7 aperture, phase detection autofocus and dual-LED flash. The camera has been rated with a score of 90 by DxOMark, which puts it ahead of Google's Pixel and Samsung Galaxy S8. HTC has also updated the front camera with new selfie-focused 16MP sensor with f/2.0 aperture and support for full HD video recording.

However, HTC U11's biggest differentiator is the new Edge Sense feature. The smartphone comes with edge mounted pressure sensors which allow users to open apps by squeezing the edge of the device. HTC U11 users can also customise the pressure sensitivity to open different apps like camera for instance. While the squeeze feature sounds like a gimmick at the outset, it could be the way of navigation on future bezelless devices.

HTC U11 features a front mounted fingerprint sensor and is IP67 water and dust resistant. The smartphone runs Android 7.1 Nougat and is backed by a 3000mAh battery with support for Qualcomm's Quick Charge 3.0 feature. The handset is expected to be available in silver, blue, black, white and red colour options. HTC U11 is retailing in the US at $649 and we expect the smartphone to launch at around Rs 60,000 price tag.