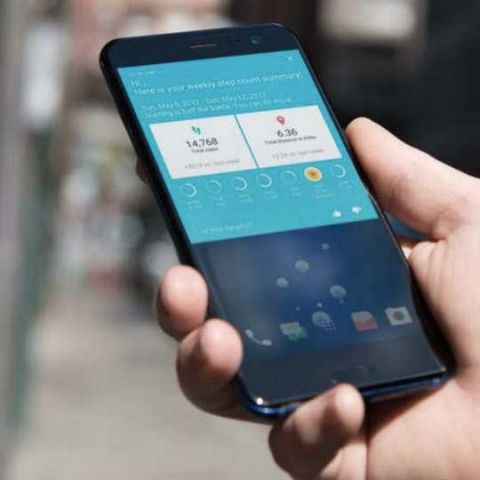 HTC's U11 smartphone sports a 12MP rear camera, which is the highest rated smartphone camera by DxO Mark

In terms of specifications, the HTC U11 features a 5.5-inch Quad HD LCD display protected by Corning's Gorilla Glass 5. The standard version offers 4GB RAM, 64GB storage, but the company also recently added a variant with 6GB RAM and 128GB storage. In a statement, it has confirmed that the 6GB RAM variant will be launched in India. The smartphone also offers expandable storage support up to 256GB via hybrid slot.

The HTC U11's claim to fame is the highest rated smartphone camera. It features a 12MP rear camera with f/1.7 aperture, phase detection autofocus, OIS and dual-LED flash. It also records 4K videos at 30fps and full HD slow-motion videos. The rear camera has been rated above Google's Pixel by DxOMark with a score of 90. For selfies, there is a 16MP front camera with f/2.0 aperture and support for 1080p video recording.

The HTC U11 also offers a new method of interaction with its squeezable frame. The smartphone's frame comes embedded with sensors, which can be squeezed to launch apps or trigger the camera. HTC U11 runs Android 7.1 Nougat with Sense UI and the company says that the feature has been baked into the user interface. The device launches with Sense Companion and Google Assistant, but the company also plans to add support for Amazon's Alexa assistant via a software update.

Like Apple's iPhone 7, HTC U11 also ditches the 3.5mm audio jack and instead ships with the company's USonic headphones with active noise cancellation. It is is backed by a 3000mAh battery and was announced at €749. The smartphone is expected to debut here at a retail price of around Rs. 60,000.