HTC U11 Plus with 6-inch display, bezel-less design launching on November 2

HTC has started sending out media invites for an event in Taipei scheduled for November 2, where it is likely to launch the U11 Plus smartphone. The U11 Plus is expected to be HTC's first smartphone with a nearly bezel-less design and a display supporting the 18:9 aspect ratio. The invite comes marked with a giant U confirming the upcoming smartphone and the launch is scheduled to start at 2PM local time.

The U11 Plus is expected to sport a 5.99-inch display with a Quad HD+ resolution of 2880 x 1440 pixels. The smartphone is said to use a display panel from Japan Display (JDI) and support 18:9 aspect ratio, already seen on phones from Samsung, LG, Xiaomi and Huawei. HTC will be using Snapdragon 835 mobile chipset for its U11 Plus and it will have either 4GB or 6GB RAM and option for either 64GB or 128GB internal storage. 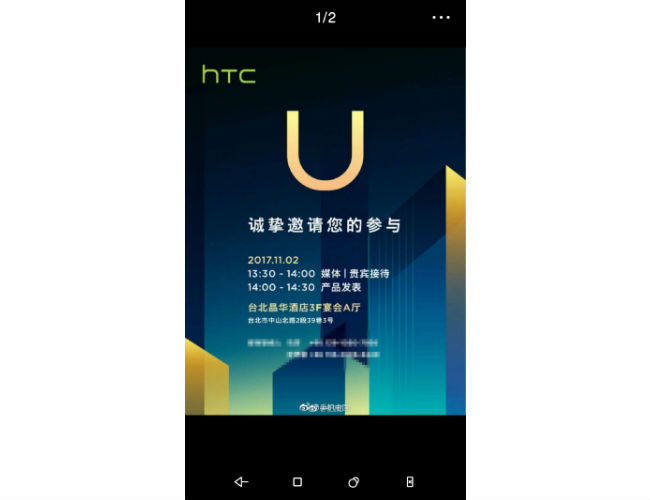 In comparison with HTC U11, the U11 Plus is only expected to see an upgrade in the design department and will stick to single to single rear camera setup. The U11 Plus will sport a 12MP rear camera with f/1.7 aperture and optical image stabilisation. With Google Pixel 2 topping the ranks on DxOMark rating, the new U11 Plus is also likely to score high points when it gets announced on November 2. There will be an 8MP front camera for selfies.

The U11 Plus will be IP68 water and dust resistant and might run Android 8.0 Oreo out of the box. The smartphone will also feature Edge Sense feature, which allows users to squeeze the frame of the device to trigger apps or Google Assistant. There is no word on battery capacity but U11 Plus is expected to support Quick Charge 3.0 and will be available in China first.

HTC recently sold a part of its smartphone engineering division to Google for nearly $1.1 billion but the company is not giving up on its smartphone business. With U11 Plus, HTC is highly anticipated to reinvigorate the demand for its premium phones which have paled in comparison to Samsung in the past year.