Android Marshmallow updates on HTC phones will start rolling out from the end of 2015. 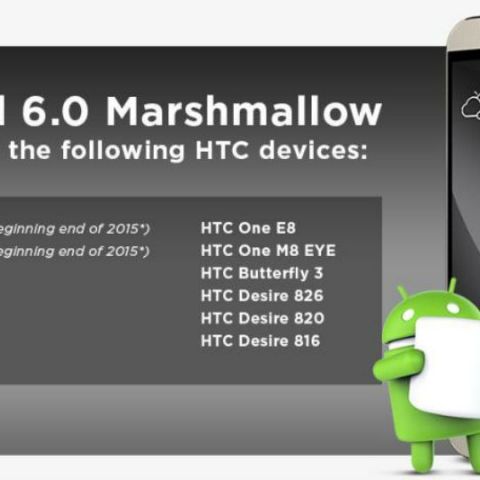 HTC has announced a list of 12 smartphones that will receive the Android Marshmallow update. The update will be rolled out to the HTC One M9 and M8 first and will start from the end of this year. Other devices included in the list include the HTC One M9+, One E9+, One E9, One ME, One E8, One M8 EYE, Butterfly 3, Desire 826, Desire 820, and Desire 816. The exact time frame for each device to receive the update would vary and might even stretch to months.

If HTC becomes successful in updating the One M9 and M8 as per its plan, they could be the first devices to receive the update apart from the Nexus devices. Android Marshmallow was first unveiled by Google at the Google I/O event earlier this year followed by its official launch yesterday at an event. Google has said the latest iteration of its Android OS will be released for Nexus devices from next week.

Android Marshmallow v6.0 is bringing a lot of new features to the devices. The latest OS is focused on battery and RAM optimisation along with better privacy settings. Users will be able to allow and deny individual permissions for the installed apps. It will also bring native support for fingerprint scanning. Another feature that Android M will bring is Google Now on Tap. It is a feature that allows users to get relevant information depending upon what he is doing and that too without leaving the app he is using. Google has already made this feature available for Android M Developer Preview 3.

As for HTC, the company announced HTC One M9+ Aurora Edition and HTC Butterfly 3 today. The One M9+ Aurora Edition is an updated variant of the earlier launched One M9+, while the Butterfly 3 is the global and rebranded version of J Butterfly. Interestingly, HTC has also posted on Twitter that it will be announcing a new device on October 20 which will run on Android Marshmallow v6.0 straight out of the box. It is expected to be the HTC One A9/Aero. It is rumoured to be device with mid-range specs. The device is speculated to run on Snapdragon 620 chipset along with 3GB of RAM. It might also have 5-inch Full HD, 13MP rear shooter, and 5MP front shooter.