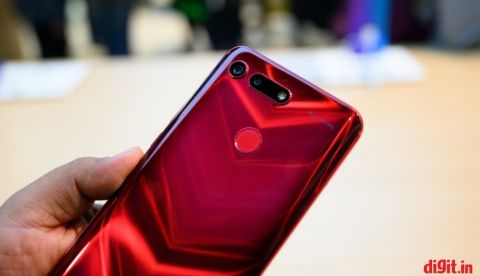 Honor will launch its latest flagship smartphone, the View 20 in India on January 29 and pre-bookings for the device was slated to commence on January 15 via Amazon. However, the company has already started the pre-bookings for the phone via its official website and is offering some enticing offers for those who register their interest for the device before it’s launched. Additionally, alleged India pricing of the handset has also leaked ahead of the launch. The Honor View 20 is the global variant of the V20 and it features a punch-hole display on the front and comes equipped with a 48MP rear camera.

Starting with the pre-bookings of the phone, one can now register for it via Honor India’s official online store. The company is offering Honor Sport BT earphone to early birds. The same offer will also be available on Amazon but from January 15 - 29 as the handset goes on sale from January 30. To claim the same on Amazon, one will need to head over to the pre-booking page of the Honor View 20 on the online retailer’s website and purchase a gift card with a denomination f Rs 1,000. This gift card will be emailed to the user and they will get to use the gift card while purchasing the device on January 30. Note that the phone needs to be bought only on Jan 30 and via the same Amazon account via which one pre-booked the handset. The user will then receive a coupon code to purchase the Honor Sport BT earphone for free in their email by February 15.

In terms of specs, the Honor View 20 packs a large 6.4-inch Full HD+ ‘All-View’ display with a resolution of 2310x1080 pixels. The All-View display has a punch-hole in it to incorporate a selfie camera, similar to Samsung’s Infinity-O displays. This should also make it the first smartphone in India to come with such a feature. The punch-hole is placed at the top left corner of the screen and measures 4.5mm in diameter. At the back, the phone is covered in glass which gets a V-shaped pattern.

Powering the View 20 is Huawei’s new flagship chipset, the Kirin 980, which is manufactured using the 7nm process. The device also comes with GPU Turbo 2.0 as well as liquid cooling, which should help when playing games. In the camera department, the Honor View 20 packs a 48MP Sony IMX586 CMOS sensor on the back. There is also a second TOF 3D sensor at the back for depth sensing. The punch-hole in the display houses a 25MP sensor with f/2.0 aperture. The handset is backed by a 4,000mAh battery with Super Charger 5V 4A charging. The phone comes with Android 9 Pie-based Magic UI 2.0.