While the price of the phone is still unknown, the online retailer has created a dedicated page, that lets people sign up and be notified of the phone’s availability 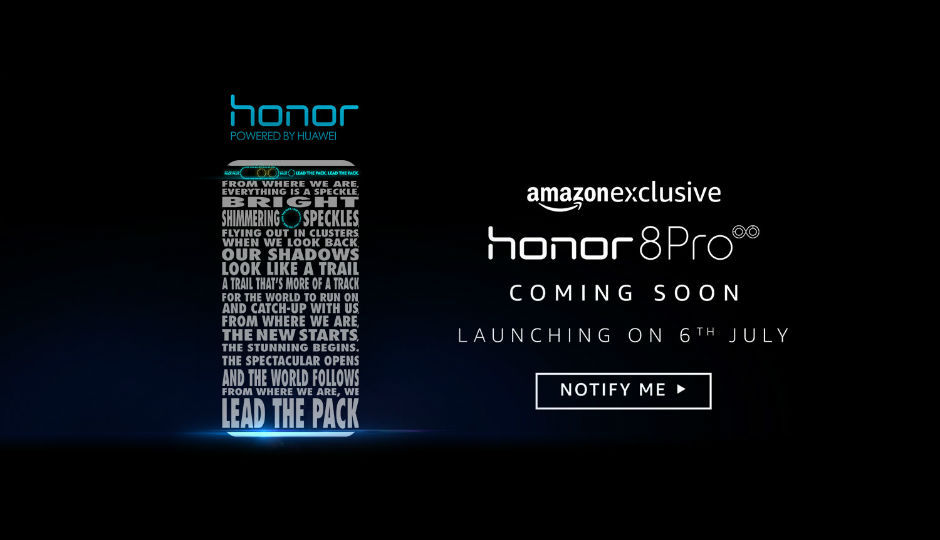 Honor’s upcoming smartphone, the Honor 8 Pro will be launching in India on July 6. The phone was recently showcased in India and it was announced that the phone would launch in the first week of July. The phone will be exclusively available on Amazon and the online retailer has created a dedicated page for the phone, letting users sign up and be notified of the phone’s availability.

As the name suggests, the phone is an upgraded variant of the Honor’s flagship smartphone, the Honor 8. The Honor 8 Pro sports a 5.7-inch QHD display with a resolution of 2560 x 1440 pixels, which is protected with Gorilla Glass 3. It is powered by the company’s own HiSilicon Kirin 960 SoC with 6GB of RAM. The device is equipped with a 4000mAh battery and offers 128GB of inbuilt storage, which can be expanded by another 128GB via a microSD card.

Like its predecessor, the Honor 8 Pro also comes with a dual-rear camera setup consisting of two 12MP cameras. One of the cameras is monochrome, while the other is RGB, data from both these sensors are combined to form a single image. At the front is an 8MP camera for selfies. The phone runs the company’s Emotion UI5, which is based on Android Nougat. You can rear our first impression of the Honor 8 Pro here.

While the price of the phone is not yet known, it will most likely go up against the new OnePlus 5. The OnePlus is sports a 5.5-inch FHD display and is powered by the Qualcomm Snapdragon 835 platform. The device is available in two variants, the 6GB RAM and 64GB storage variant is priced at Rs 32,999, while the one with 8GB of RAM and 128GB of storage is priced at Rs 37,999.