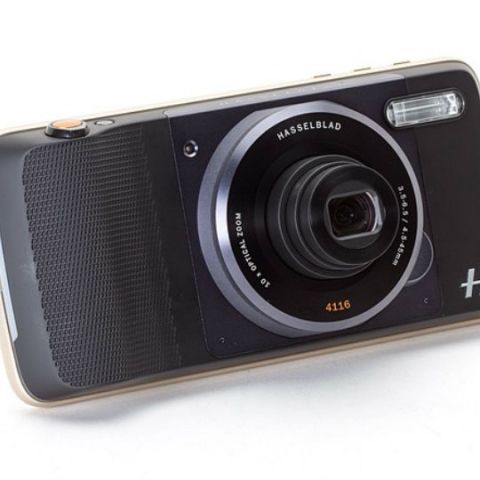 A few days ago, we spotted leaks of a MotoMod complete with a 10X optical zoom camera, a flash module, hand grip, shutter and zoom toggle. Yesterday, Hasselblad has unveiled the True Zoom MotoMod in association with Moto for the new lineup of Moto Z smartphones. The MotoMod houses a 12-megapixel 1/2.3-inch type CMOS sensor, a 25-250mm (35mm-equivalent) optical zoom lens, Xenon flash and a hand grip, along with an orange physical shutter button with zoom toggle.

Attaching the mod to a compatible Moto Z smartphone entirely bypasses the smartphone camera, and operates via the default camera app. In terms of megapixel count, the Hasselblad True Zoom mod is actually lesser than the native 13-megapixel sensor on the Moto Z, and even the 21-megapixel sensor on the Moto Z Force. It ranges from f/3.5-6.5, which does seem a bit limiting for low light photography, and particularly when you’re shooting indoors. The native ISO range is from 100-3200, and the True Zoom camera can shoot videos at 1080p, or Full HD. The mod adds about 145 grams to whichever smartphone you attach to, so you probably won’t be carrying it around on an everyday basis.

The camera can simultaneously save RAW files with the JPEG images, and will bring full manual controls for pro smartphone photographers. While it does seem to have covered the essentials of an upgraded smartphone camera, the major deciding factor will be how much of a noticeable improvement does the Hasselblad True Zoom MotoMod present over the standard smartphone cameras. While the extended native ISO range does not certify better low light performance, we can be hopefully of True Zoom performing better than what smartphones usually do, at night.

The Hasselblad True Zoom does not come with a battery of its own, so the smartphone battery may take quite some beating upon extensive usage. Initial reviews from across the world seems to suggest that the Hasselblad True Zoom does not offer a noticeable improvement over standard smartphone cameras, although it does seem to be fairly decent. We will reserve our judgement till we use it extensively.

After Leica partnered with Huawei to present a dual-camera SUMMARIT lens setup on the Huawei P9 smartphone, Hasselblad is the latest prestigious camera-maker to bring imaging technology to smartphones. Historically, Zeiss has provided camera lenses to pioneering Nokia smartphones of yesteryear, and with Hasselblad joining the smartphone party now, we cannot help but be hopeful of a new era to be heralded in smartphone photography.

Moto and Hasselblad have not yet stated details of when it will come to India, and have priced it at $299. If the True Zoom mod is unveiled in India, it may be priced at about Rs. 20,000. Will it be worth investing in? We hope so.