In just about two weeks time, Google will unveil the third generation of Pixel smartphones, and given the number and details of leaks around these devices, it seems there is not much left for Google to announce on the launch day unless the company plans on surprising us all. We have already seen a ‘Clearly White’ coloured Pixel 3 XL in several leaks and now WinFuture has published the alleged Black colour variants of the Pixel 3 XL and the Pixel 3 as well as a White colour variant of the latter. The report does not offer any new information but shows the “notched” display on the Pixel 3 XL, and a Pixel 2 XL-ish design on the Pixel 3.

The images show the smartphones from front and the back. Previous leaks have shown a Mint coloured power button on the White coloured Pixel 3 XL. According to the images by WinFuture, the Pixel 3 will also have a Mint coloured power button. From the back, both the phones look identical with a single camera and a flash that are located on the top left corner of the smartphone. The fingerprint sensor is centrally located on the back panel. The Pixel 3 might come with a 5.4-inch AMOLED display with 2160x1080 resolution, while the Pixel 3 XL might come bearing a 6.7-inch AMOLED display with a resolution of 1440 x 2960. Both the Pixel 3 devices are expected to be powered by a Qualcomm Snapdragon 845 chipset and have 4GB of RAM. There is no information on the storage options available with the new smartphones. 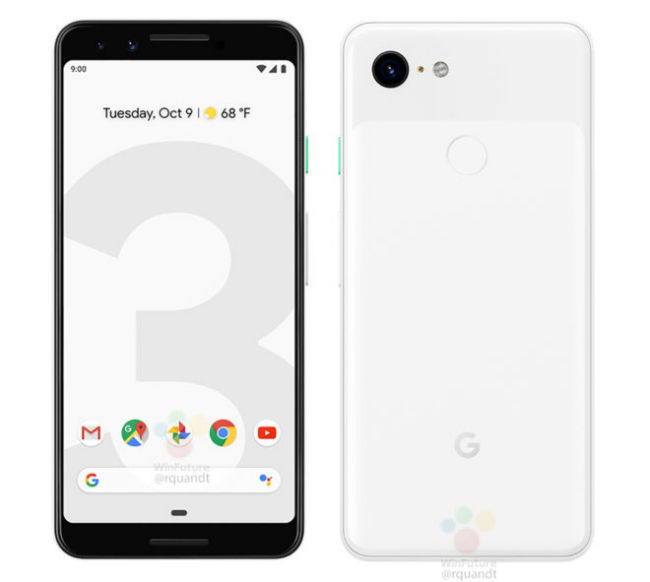 When it comes to the camera, it’s expected that the two front-facing shooters on both the phones have 8MP sensors each. While the primary camera is reported to have f/1.8 and f/2.2 variable aperture, the front shooters may come with a static f/1.8 aperture. The battery on the Pixel 3 XL is expected to have a 3,430mAh capacity, while the Pixel 3 could get a 2,915mAh battery. Both phones should run Android 9.0 Pie out-of-the-box. It is reported that Google will offer a wireless charging dock called the Pixel Stand with both the smartphones.