Google Pixel 3, Pixel 3 XL specifications, price, India launch and everything else you need to know

The launch event only went on to confirm what leaksters, bloggers, retailers, and a certain Lyft driver have already revealed about the Google Pixel 3 and the Pixel 3 XL 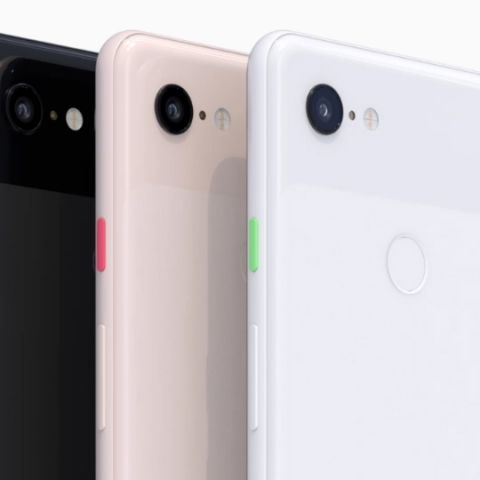 To no one’s surprise whatsoever, Google announced the Pixel 3 and the Pixel 3 XL, along with a bunch of other ‘Made By Google’ products including the Pixel Stand,Google Home Hub, Pixel Slate and more at an event in New York. The launch event only went on to confirm what leaksters, bloggers, retailers and a certain Lyft driver have already revealed. The Pixel 3 XL has the smartphone industry’s “worst kept secret”. The only surprise was however, Google admitting to it and even indulging in some jovial camaraderie about it. Nevertheless, the Google Pixel 3 and the Google Pixel 3 XL is finally out in the open (officially) and I don’t about you guys, I’m certainly excited to use the phone. The key upgrade this time is obviously in the camera, but this is probably the biggest change in the design of the phone. There are also some interesting, useful improvements and additions that weren’t thankfully revealed by the leaksters. Read on to know more.

First the hardware specs. The Google Pixel 3 and the Pixel 3 XL are both powered by the flagship Qualcomm Snapdragon 845 chipset. The 64-bit chipset has eight cores with a peak clock speed of 2.5GHz, paired with an Adreno 630 GPU. That’s the best you can get for Android devices currently. The chipset is coupled with 4GB LPDDR4X RAM with either 64GB or 128GB onboard storage. The smaller Pixel 3 sports a Full HD 5.5-inch flexible OLED display while the Pixel 3 XL touts a 6.3-inch QHD+ flexible OLED panel with 18.5:9 aspect ratio. And for those wondering, it does have a notch. A rather big one. On the back is a 12MP dual-pixel camera with 1.4um pixels and Optical Image Stabilisation (OIS). There’s an added spectral and flicker sensor and the lens has an aperture of f/1.8 aperture. Google is sticking to the single lens implementation on the Pixel 3 phones. Up front though, is a dual camera setup. Two 8MP sensors are housed in the notch of the Pixel 3 XL while on the Pixel 3, it’s placed above the display. The second sensor on the front has a wide-angle lens with f/2.2 aperture and 97-degree wide field of view. The second sensor has an aperture of f/1.8 with a field of view of 75-degrees.

In the box, you get the Pixel USB-C earbuds, a USB-C to 3.5mm dongle, Quick Switch adapter, charging cable and an USB-C 18W fast charger. 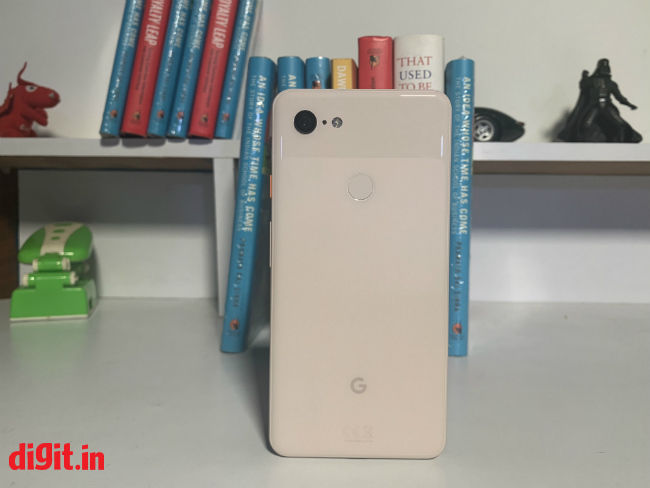 As we mentioned before, one of the biggest change in the Pixel 3 and the Pixel 3 XL is in the design. Among the changes, the polarising one is the presence of the notch. To be frank, we’ve seen almost every Android OEM adopt the notch from the iPhone X and at the fag end of the year, it’s clear that the notch is here to stay. It’s better to get used to it. The Pixel 3 and the Pixel 3 XL retained the dual-tone design, only this time it’s all glass. Google has used a soft-touch glass panel for the back. The colours this time are Clearly White, Just Black and Not Pink. The Orange power is now on the “Not Pink” variant while the “Clearly White” variant now has a mint coloured power button. Both look really nice. Then there’s the black variant that is well, “Just Black”. Google has used a new etching design that renders a glossy and matte texture on the same piece of glass. It’s also quite lightweight and easy to use, Google said. Both phones are IP68-certified water and dust resistant. There are two speakers and both are on the front. On the Pixel 3 XL, one speaker is housed on the notch and the other is housed right below the display on the rather big bezel. 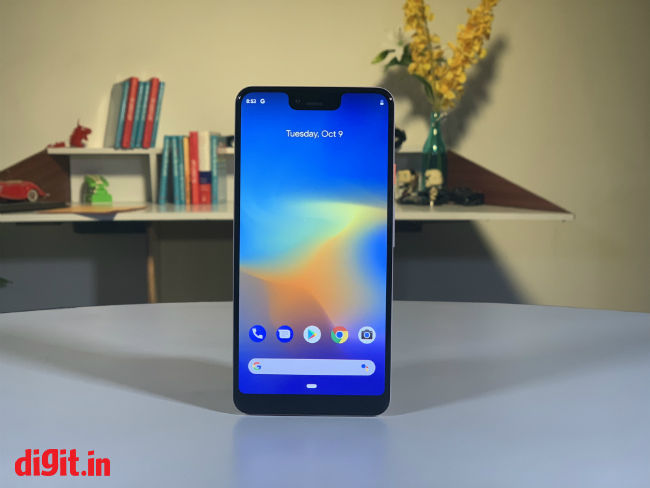 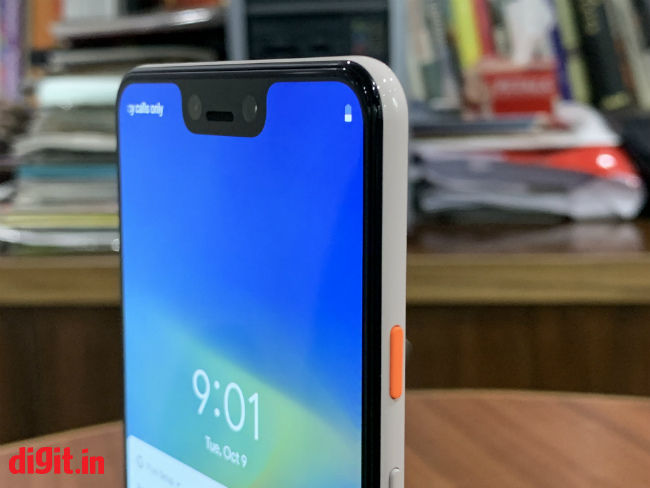 The panel on the Pixel 3 phones is always on and show you the time and notifications when the phone is locked. It supports 100% DCI-P3 colour gamut. It has a 100,000:1 contrast ratio and supports 16.77 million colours. 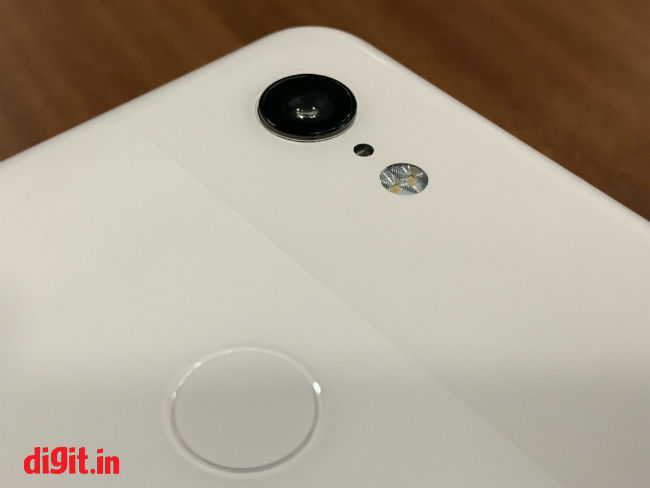 The camera is the center of the attraction on the Pixel 3 phones and Google makes no distinction in the two phones when it comes to imaging. This time too, both Pixel 3 phones have a 12MP sensor at the back and two 8MP sensors up front. The hardware is only the tip of the iceberg. Google relies on years of research on machine learning and computer vision to enhance the photos. Here are all the camera features that you need to know:

To prevent missed photo opportunities, Top Shot takes multiple shots before and after you’ve pressed the shutter button and chooses the best photo of the moment. It detects blurs, focus and moments to recommend the best shot.

This mode builds up on the experimental app Google launched sometime back called Selfissimo! and snaps a photo when it detects a smile. It also recognises funny faces like people with their tongues out (: P) and takes a photo automatically. There’s a Google Assistant command for it.

The Night Sight feature enhances low-light photos by taking multi-exposure shots and processes them using computational photography techniques to bring more details and vibrance to photos, so much so, that Google claimed you won’t even need a flash. Google compared a shot taken with the feature on, with one shot from the new iPhone XS and it did look a lot more enhanced, if not a tad oversharpened.

While phones like the Huawei P20 Pro, Samsung Galaxy Note 9 and the iPhone XS rely on a second camera for optical zoom, Google is confident it’s algorithms are enough to beat that. Super Res Zoom takes multiple photos and fuses them together to create lossless zoom. We’ll surely be testing out this claim.

The Pixel 3 XL will also support shooting in RAW to ensure the photo retains the most about of information.

Playground is based on Augmented Reality and makes photos and even videos come alive with animated characters. At the launch, we saw Marvel’s Avengers and Childish Gambino. More characters will be continuously added in the future.

The front camera of the Google Pixel 3 and the Pixel 3 XL have a wide-angle lens that allows you to shoot wide group selfies with a 97-degree field of view and even corrects barrel distortion according to Google.

The Google Pixel 3 and the Pixel 3 XL run on Android 9.0 Pie out of the box. There’s gesture navigation with the Pill-shaped navigation bar. You can swipe down on the fingerprint sensor to bring down the notifications. There’s a Motorola-like feature where you twist your hand to switch between the front and rear cameras. Google Lens is integrated in the camera and runs in real-time capturing information from the viewfinder to give you recommendations. You don’t need be online, Google said.

Digital Wellbeing is also a key focus this time. Flipping the phone over face down will activate DND mode. A dashboard shows the time spent on the phone with granular information on your activities and a ‘Wind Up’ to grey out the screen for a better sleep at night.

The Pixel 3 phones are also fitted with a custom chip for added security. It’s called the Titan-M and it creates a secure enclave to house sensitive information like payment data under encryption.

The Pixel 3 phones, like all the older ones offer unlimited storage of photos on Google Photos in their original resolution. There’s also Smart Storage taken from the Files Go app that scans your storage to delete stuff you don’t need.

There’s also the support for rich text messaging that Google had introduced earlier. You can also reply and view your messages on your computer.

The Pixel 3 and the Pixel 3 XL also support wireless charging. You can power them using Qi-standard chargers. There’s also the Pixel Stand that Google launched. It keeps the Pixel upright while charging and throws up good photos to watch while it’s getting charged.

The Pixel 3 phones also support fast charging (USB-PD 2.0) and Google claims the phone delivers 7 hours of battery life with just 15 minutes of charging. It comes with an 18W charger out of the box.

The Pixel 3 and the Pixel 3 XL have USB-Type C ports with USB 3.1 Gen 1 standards. There’s no 3.5mm headphone jack  so audio is routed through the charging port. Google is offering a Pixel USB-C Earbuds to boot and there’s also a USB-C to 3.5mm dongle. There are two front firing speakers that deliver stereo sounds apart from 3 mics. Both the phones support LTE Cat 16 and for some regions, there’s support e-SIM as well.

Pre-orders for the Google Pixel 3 and the Pixel 3 XL start from October 11, 2018 on Flipkart, Airtel and other offline retailers including Reliance Digital, Croma and other stores. They will shipping from 1st November 2018.

The Pixel Stand will be sold separately for Rs 6,900.

The pre-order offers include a no-cost EMI starting Rs 3,944 per month while Pixel and Nexus phone owners can encash loyalty benefits from Flipkart and other offline retail stores.