Google is expected to unveil the next generation Pixel smartphones later this year. The Pixel 2 and Pixel 2 XL are expected to be the first devices to house the Qualcomm Snapdragon 836 platform. 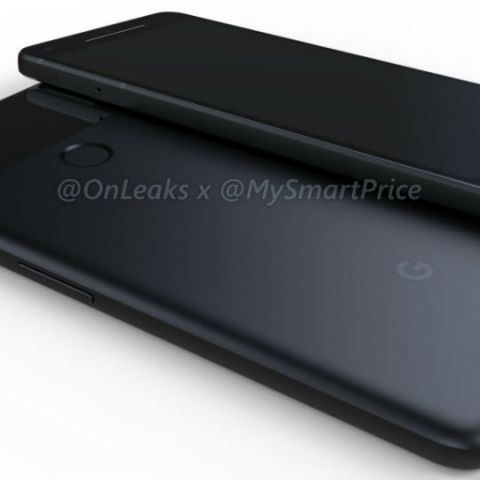 What’s next from Google’s smartphone division? A question that has the industry buzzing with rumours and leaks. We know that Google will be launching the second generation Pixel smartphones sometime soon. Alleged images of the Pixel 2 and Pixel 2 XL have been doing the rounds on the web and we now have new 3D CAD renders that have been created by leakster Onleaks, in collaboration with Mysmartprice.

Once again, the images of the Pixel 2 and Pixel 2 XL suggest that the phones now have thinner bezels as opposed to their predecessors. Two speaker grills can be spotted on the top and bottom of the alleged Google Pixel 2 smartphone, but only a single one is spotted at the bottom of the Pixel 2 XL. The fingerprint sensor remains at the back of both devices, which also observably lack a dual rear camera setup. Looks like Google is not about to blindly follow an emerging trend in the smartphone industry, as most flagship devices these days come with a dual rear camera setup.

Also missing from the leaked Pixel 2, Pixel 2 XL 3D renders is the 3.5mm headphones jack. Google might be looking to provide audio through a USB Type-C connector instead. While the renders show the black colour variant of both the Pixel 2, Pixel 2 XL, Google is reportedly planning to launch the devices in several other colours.

It was recently reported that the Google Pixel 2, Pixel 2 XL will come with dual-rear cameras and an edge-to-edge display, so you might want to take these renders with a pinch of salt. It has also been said that Google’s upcoming flagships will be powered by a Snapdragon 836 platform, which will be a revision to Qualcomm’s current flagship chipset, the Snapdragon 835.