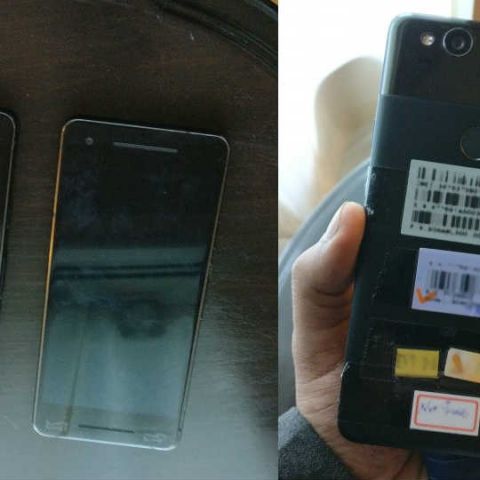 Google Pixel 2, the successor to last year's Pixel smartphone, has leaked once again in the form of live images. The leak comes just a day after VentureBeat reported that the second generation Pixel won't feature a bezel-less design, something most flagship smartphones have adopted this year.

The new live images obtained by GSMArena reveal confirm that the smartphone will sport large top and bottom bezels similar to its predecessor. The stickers on its back confirm the smartphone is an early developer unit and sports a smaller glass window compared to the one found on the original Pixel series. It is also clear that Google is not adopting a dual rear camera system for its 2017 Pixel series, although it is expected to offer laser autofocus assembly.

Similar information about the next generation Pixel devices also surfaced in the form of a leak previously. The older leak showed 3D renders of the Pixel 2 and Pixel 2 XL, suggesting that the phones now have thinner bezels as opposed to their predecessors. Two speaker grills could be spotted on the top and bottom of the alleged Google Pixel 2 smartphone, but only a single one was spotted at the bottom of the Pixel 2 XL. The fingerprint sensor remained at the back of both devices, which also observably missed out on a dual rear camera setup.

The new report also confirms that the smartphone skips on the 3.5mm headphone jack, following a trend popularised by Apple, HTC and Motorola. Google is working on two Pixel smartphones for this year, with the smaller of the two codenamed Walleye being manufactured by HTC and the larger model code-named Taimen being designed by LG. Some reports suggest that Google is not adopting the bezel-less design for its Pixel smartphone because HTC is yet to launch a smartphone with such design language.

The Google Pixel 2 and the larger Pixel XL 2 are also confirmed to offer front stereo speakers similar to BoomSound. Both the handsets are also tipped to feature frame-embedded pressure sensors similar to HTC U11's Edge Sense feature. There is no word yet on specifications and pricing of these devices, but it now seems evident that the larger Pixel will be the star in Google's 2017 smartphone lineup.