We know that using dark theme saves power on AMOLED displays and Google reiterated the same during its recently concluded Android Dev Summit 2018. However, the company had some interesting data to share on the subject, in slides showcased during the event. These slides reveal how much power is drawn from the battery when the company’s Pixel smartphone is being used when YouTube is run in dark and standard mode. Needless to say, there’s a huge difference and considerable battery savings when running YouTube in dark mode. Additionally, the company also showed how different colours impact the battery life on a device. 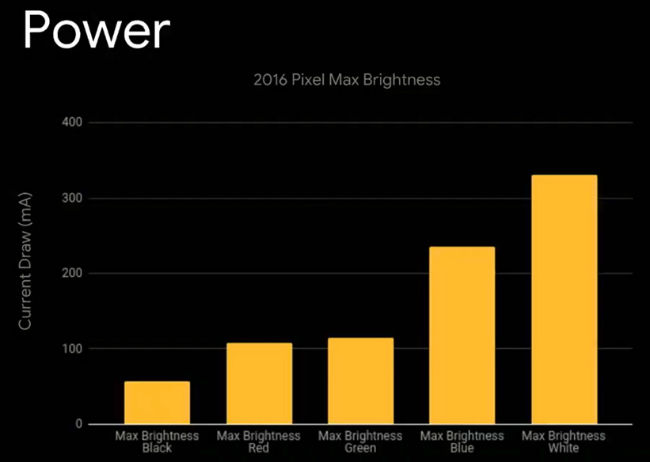 As seen in the image above, at maximum brightness, Black uses up the least amount of battery, while representing White colour draws maximum current. However, this is counterproductive to Google’s implementation of Material Design, which extensively uses the colour white. The company did push Black themes to its Messages and the YouTube app but there are many other apps where the company could use darker colours, along with a device’s Settings. With Android Pie, there is an option to select a Dark theme that turns the quick settings and the Google Feed dark, but it is not a system-wide implementation. 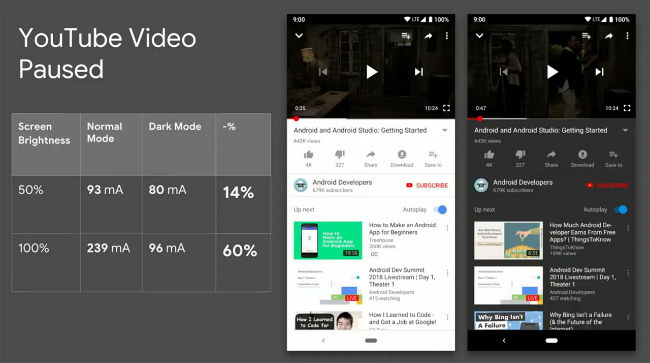 YouTube recently got a Dark Mode update, which was initially announced back in July this year. The new colour theme can be found in the General tab, within the app's Settings. This new theme is applied throughout the app, even in the search bar, the video descriptions and the comments section. As mentioned earlier, the same was applied to the Messages app, however, there were some hiccups along the way since the new colour scheme was rolled back and then later seeded with version 3.5 of the app.