Gionee's next flagship mobile- the Elife E6 is available on Snapdeal for Rs 22,165, with an estimated delivery date of 10 business days. The Chinese handset maker has sent out invitations for an official event on Oct 3 where the company is expected to release the Elife E6.

The Gionee Elife E6 was unveiled globally earlier this year, it features a unibody design and a 5-inch OGS (One-Glass-Solution) AMOLED display with 1080 x 1920 pixels resolution. The device is powered by a 1.5GHz Mediatek quad-core processor, coupled with 2GB of RAM and has 32GB inbuilt memory.

The Elife E6 smartphone has a 13 MP auto focus rear camera with BSI sensor and LED flash as well as a 5MP front-facing camera for video calling. Both cameras support 1080p HD video recording. The smartphone runs on Android Jelly Bean with Amigo UI on top. The device is powered by a 2020mAh battery.

On the connectivity front the device supports 3G, Wi-Fi, GPS, USB and Bluetooth 4.0. Other features included are gesture controls, which allow users to answer phones by directly raising it up to their ears and answer calls by sweeping a hand over the screen. Users can flip between pictures by a sweeping motion, and the smartphone automatically play/pause videos when the user looks away from the screen. The Gionee Elife E6 will be launched in Black and White colour variants.

Gionee had recently launched the dual sim (GSM GSM) Gionee P2 Android smartphone. The smartphone features a 4-inch WVGA display and 480 x 800 pixels resolution. It runs on Android 4.2 OS and has a powerful 1.3GHz dual-core processor. The device comes with a 5MP rear camera and a VGA front facing camera for video calling. The Gionee P2 has 4GB of internal storage expandable via MicroSD card to 32GB. This Ginoee smartphone is available for Rs 6,190 in India. 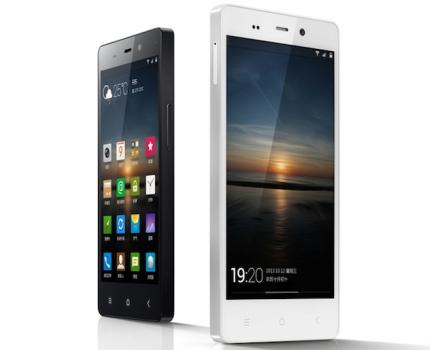