Apple is expected to announce its 2018 lineup of iPhones in a couple of months and information on the upcoming devices have started pouring in. One of the iPhones has been spotted on Geekbench by Slashleaks.  Listed as the iPhone 11,2 and it comes with 4GB RAM. It is seen running the company’s latest iOS 12 operating system. Additionally, it is listed running on a D321AP chip, which could be the updated version of the D22AP SoC (A11 Bionic) that is currently used on the iPhone X. The Geekbench scores tip at the same, as the alleged iPhone scores 4673 in single-score tests and 10912 in multi-core tests.

A video of the iPhone’s dummy models was also posted online and it reaffirms the ongoing rumours of a triple-rear camera on the larger iPhone X Plus. Apple is expected to announce three new handsets in September and as per an earlier report, there could be a 6.5-inch iPhone X Plus with an OLED display, along with a smaller 6.1-inch iPhone that is expected to cost lesser than the current iPhone 8. It is speculated that there will be a 5.8-inch iPhone with an OLED display and it’s said to be an iPhone X successor. The video also hints at the near bezel-less edge-to-edge display on the iPhone X Plus with a 6.5-inch screen, due to which it is said to be the same in size as the iPhone 7 Plus. 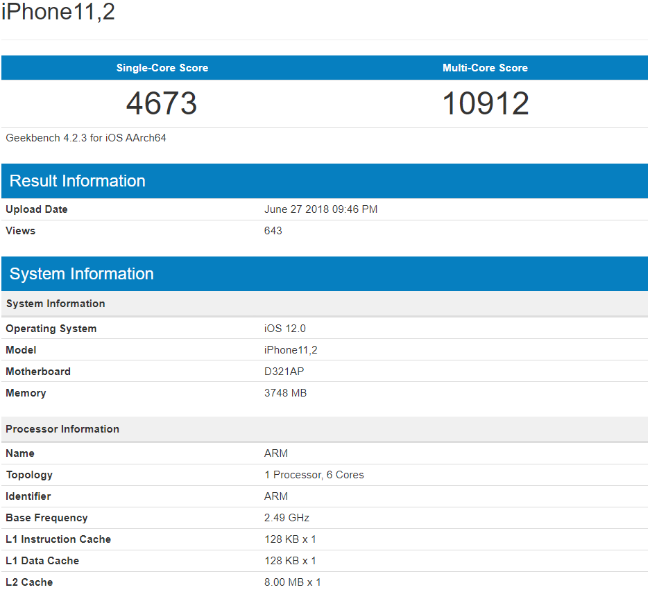 In a previous report, schematics of the iPhone revealed a triple rear camera setup on the device. The setup on the phone seems similar to the one seen on the Huawei P20 Pro. However, there could be a single camera module on the 6.1-inch iPhone and also, no 3D Touch. In order to cut costs, the device could be equipped with an LCD display instead of an OLED screen. Some renders of the ‘budget’ iPhone were also recently leaked online. They showcase the Apple’s device in a protective case made by Ghostek, a third-party case manufacturer, indicating that the case manufacturers are already working on the iPhones with new designs.