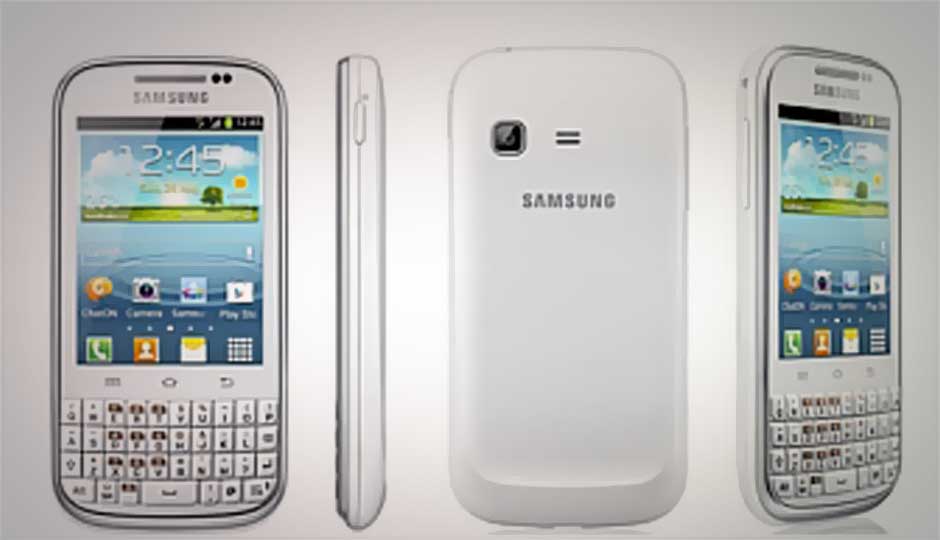 Samsung has unveiled a new Android 4.0 Ice Cream Sandwich-based Galaxy smartphone called Galaxy Chat. The device is scheduled to release in Spain this month and will be gradually made available in other markets including Middle East, China, Southeast Asia, and Southwest Asia. Samsung has not yet revealed the price of the Galaxy Chat, but it is expected to be an entry-level one.

Speaking about specifications, the new Samsung Galaxy Chat has a 3-inch capacitive touchscreen with QVGA 240 x 320 pixels resolution as well as a QWERTY keyboard. As said before, the Galaxy Chat will run on Android 4.0 ICS OS straight out of the box. The device is powered by an 850MHz processor. It sports a 2MP camera, 4GB of built-in storage and a slot for a microSD card. Memory details are so far, not known.

For connectivity, the Samsung Galaxy Chat supports USB 2.0, Wi-Fi b/g/n and Bluetooth 3.0. The Galaxy Chat comes preloaded with various apps including Quick Office document editor and S Planner apps. It comes with a 1,200 mAh battery, which is rated to deliver up to 14 hours and 40 minutes of talktime, and up to 520 hours of standby time.

The new Galaxy Chat smartphone is said to have resemblance with BlackBerry phones (mainly due to the QWERTY keypad) and supposedly focusses on Samsung's cross-platform ChatON messaging app.

What do you think of the new Galaxy Chat? Let us know in the comments section below: