Two individuals were arrested after the MD of Ringing Bells, the company behind the controversial Freedom 251 smartphone, filed an FIR against them for not delivering Freedom 251 units even after the company paid them in advance. 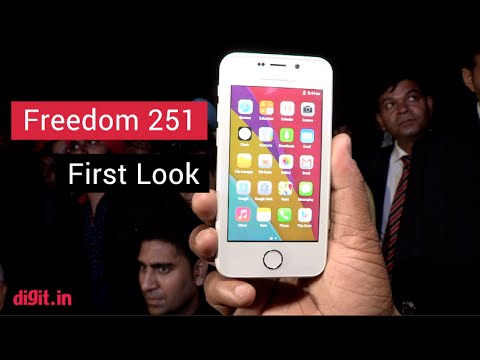 A smartphone for Rs 251 always sounded too good to be true, and it was.

Mohit Goel, the maker of the controversial "Freedom 251" smartphone which became the talk of the town last year, resurfaced on Sunday, saying that if he gets support from the government, he can still deliver the handsets by March-April next year.

Police on Sunday arrested two persons after Goel, Managing Director of Noida-based Ringing Bells Pvt Ltd which launched the world's cheapest smartphone last year, filed an FIR against them for not delivering "Freedom 251" units even after the company paid them in advance.

Speaking to IANS over phone, Goel said: "I paid the duo nearly Rs 3.5 crore and, in return, they cheated me. They siphoned off the money and did not deliver any phone. In February this year, some distributors filed a case against me and I was jailed for six months. Now with the fresh arrests, people will come to know why I failed to deliver on my promise."

Goel lamented that the government did not come to his support despite his commitment to 'Make in India' and 'Start-up India' initiative by providing every single Indian citizen with a smartphone.

"The big players today have adopted my model and are now giving smartphones in as low as Rs 1,300, like Karbonn. The Jio model for paying Rs 1,500 in advance for a smartphone is similar. They have deep pockets so they can afford but why don't people ask them how they are making smartphones so cheap?" he said.

"My vendors didn't deliver on time and I failed. Our company's President Ashok Chadda is still languishing in jail. I need one opportunity to come back clean and provide people handsets by March-April next year," Goel told IANS, adding that he is not planning anything else at the moment but to focus on his "Freedom 251" dream.

The company in mid-February 2016, had planned to deliver 2.5 million handsets before June 30, the same year. Ringing Bells received mammoth -- over 70 million -- registrations before its payment gateway crashed.

The world's cheapest phone made a splash across the globe, with almost every big media house writing about the "miracle device".

After announcing that it had delivered 5,000 'Freedom 251' smartphones to customers in July last year, Ringing Bells said it would deliver 65,000 more to those who had booked the device in cash on delivery (COD) mode.

But no new numbers were shared afterwards.

Goel was arrested in February this year after an FIR was filed by Ghaziabad-based distributor Ayam Enterprises, alleging that Ringing Bells defrauded it of Rs 16 lakh.

The Allahabad High Court later granted bail to Goel. The court had observed that a compromise was agreed upon between the parties involved in the case.