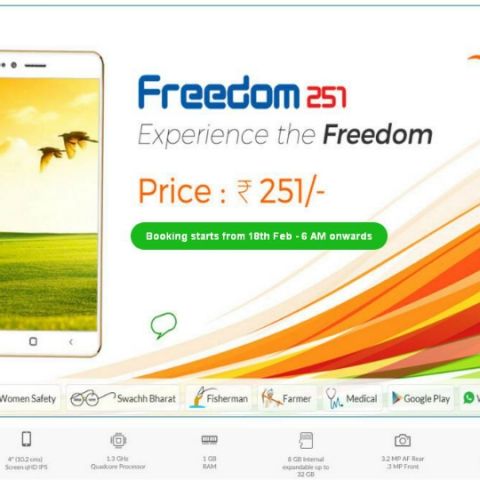 The Enforcement Directorate conducted a probe against Ringing Bells under FEMA.

he Enforcement Directorate (ED) has reportedly said that the Freedom 251 smartphone could have been yet another Ponzi scam. According to a report by The Quint, the ED, which questioned Ringing Bells CEO Mohit Goel, on February 29, has claimed that it has succeeded in safeguarding consumers’ money. The ED recorded Goel’s statement over two days, said the report, in a probe that was conducted under the Foreign Exchange Management Act (FEMA).

Further, the report states that Goel has assured the ED that consumers’ money will be refunded. The Quint quoted a senior official from the ED, who said that Goel appeared to be a “publicity-hungry” person, and that he thought an unusual scheme like the Freedom 251 would catch people as well as the media’s attention.

Well, if that was the case then he certainly has succeeded, but not without inviting probes from various government bodies.

Further, Ringing Bells has reportedly collected Rs. 75 lakh from the on its escrow account with CCAvenue payment gateway, but the ED has written to CCAvenue, directing them not to release the money. The payment gateway is yet to respond though. On the other hand, Ringing Bells had another account with PayU, which has confirmed to the ED, that the money it has received for Freedom 251 registrations will not be released to Ringing Bells and will be returned to customers.

The Quint’s report also quotes the official, saying that Ringing Bells planned to “produce fake receipts” to CCAvenue in order to access the money from the escrow account. The ED has said that it will keep a close watch on Mohit Goel and his company, even after the recent Cash On Delivery announcements, as “he has no pragmatic business plan” for this model to work either.

We have made repeated attempts to get in touch with Ringing Bells about various queries, but the company has failed to respond to any of them till now.