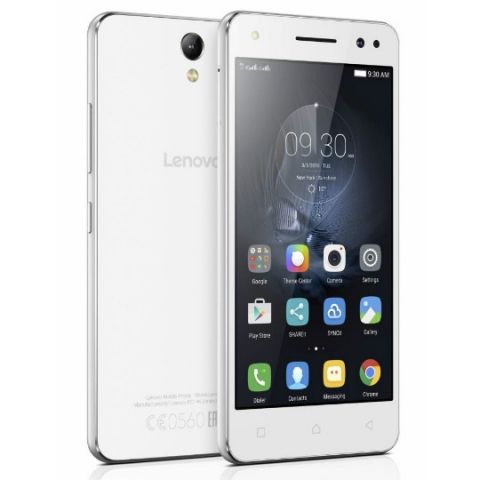 Lenovo has announced the Vibe S1 Lite at CES 2016. The smartphone is a toned down variant of the selfie focused Lenovo Vibe S1 and is priced at $199, which is approximately Rs. 13,200. The device comes with a 5-inch Full HD display and is powered by an octa-core MediaTek MT6753 SoC clocked at 1.3GHz as well as 2GB of RAM. It is equipped with 16GB of onboard storage which can be expanded by up to 128GB via a microSD card slot. The phone comes with a 2700mAh battery and runs Android Lollipop v5.1. At the back of the phone is a 13MP ISOCELL camera with phase detection autofocus and a dual-tone flash.

The Lenovo Vibe S1 was launched in India in November was priced at Rs. 15,999. The highlight of the phone was the dual front facing cameras. The primary front camera was an 8MP unit with a secondary 2MP camera. This set up allowed users to change the focus of the photo after it is taken, blur the background, or cut out certain sections of the photograph. At the back was a 13MP camera with dual tone flash and phase detection autofocus. The phone also comes with a 5-inch Full HD display and is powered by a 1.7GHz MediaTek MT6752 SoC with 3GB of RAM. The device is equipped with 32GB of onboard storage which can be expanded to 128GB via a microSD card. The phone also comes with a 2500mAh battery which is slightly smaller than the one found on the Vibe S1 Lite.

Lenovo also launched its two battery-focused phones in India in October called the Vibe P1 and the Vibe P1m, which comes with 5000mAh and 4000mAh batteries respectively. The Vibe P1 has a 5.5-inch Full HD display and is powered Qualcomm Snapdragon 615 SoC with 2GB of RAM. At the back is a 13MP camera, while there is a 5MP front camera. The Vibe P1m on the other hand, comes with a slightly smaller 5-inch HD display and is powered by a MediaTek MT6735P SoC with 2GB of RAM. The phone is equipped with an 8MP rear camera and a 5MP front camera. The Lenovo Vibe P1 and P1m were launched in October at a price of Rs. 15,999 and Rs. 7,999 respectively.

In Lenovo also launched the followup to its popular K3 Note smartphone today. Called the Vibe K4 Note, the phone is priced at Rs. 11,999 and will be exclusively available on Amazon via a flash sale from January 19. The company also announced a bundle priced at Rs. 12,499 wherein customers will get the phone as well as a VR headset called AntVR. The device also comes with TheatreMax technology which allows users to view videos as though they are watching it in a theatre when wearing a headset. Other specifications of the phone includes a 5.5-inch Full HD screen and is powered by a octa-core MediaTek MT6753 SoC with 3GB of RAM. The phone comes with 16GB of internal storage which can be expanded to 128GB. The phone comes with a 3300mAh battery and runs Android Lollipop v5.1. At the back of the phone is a 13MP camera with phase detection autofocus with a fingerprint sensor located below the rear camera, while at the front is a 5MP camera. The Vibe K4 Note also comes with dual front speakers with Dolby Atmos, 4G LTE capability, and NFC. The phone is available in a Tuxedo Black colour variant and the company has also announced a premium leather cover, with wood covers launching soon.