The BlackBerry KEY2 will be an Amazon exclusive in India and sales for the device will start on July 31. 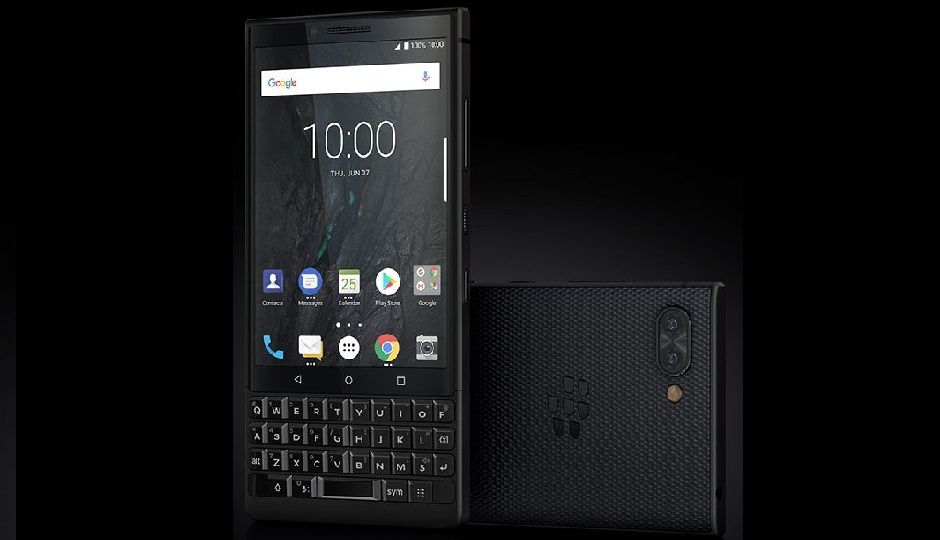 The device features a physical QWERTY keyboard, with the fingerprint sensor integrated on the space bar. The KEY2’s design resembles its predecessor’s a lot, but it’s USP is that it now features a dual rear camera setup, instead of the single primary camera found on the KEYOne.

BlackBerry KEY2 Specs: The BlackBerry KEY2 runs on the Octa-core Qualcomm Snapdragon 660 processor, with four cores clocked at 2.2 GHz and another four at 1.8GHz. This is supported by 6GB RAM and 64GB storage, expandable up to 256GB using an external SD card. At the front is a 4.5-inch 1080×1620 display with an aspect ratio of 3:2. The QWERTY keyboard comes with an integrated fingerprint scanner, along with a new feature called Speed Key, which is a customisable shortcut key for accessing contacts and apps. Similar to the earlier BlackBerry-styled keypad, the new keyboard also responds to touch gestures, like swiping to go back a screen and more.

In terms of optics, the BlackBerry KEY2 features a dual 12MP + 12MP camera setup with 2x optical zoom. There’s a front 8MP camera for selfies. The KEY2 gets popular camera features such as Portrait Mode and Optical Superzoom. The phone also integrates Google Lens integration, so users can point the KEY2’s camera at objects, places, or even text to and get search results from the internet, match products for shopping online, or copy text from real-world images.

The entire package is powered by a 3500 mAh battery and the phone supports Quick Charge 3.0. The company claims that the KEY2 can be charged to 50 per cent in 40 minutes. For connectivity, the KEY2 features Bluetooth 5.0 LE, a USB-Type C port, NFC and even FM Radio. The device runs on Android Oreo 8.1 out-of-the-box.

BlackBerry KEY2 price in India: The phone comes in at flagship pricing of Rs 42,990, which makes it more expensive than the Snapdragon 845-powered OnePlus 6 and Asus Zenfone 5z, but cheaper than the Oppo Find X which also features the premium SoC. Snapdragon 660 powered phones in India include the likes of the Nokia 7 Plus, which is priced at Rs 25,999. The BlackBerry KEY2 demands its hefty price tag owing to its premium design and enterprise-grade security features. It features an aluminum frame with a soft textured back for extra grip. Gorilla Glass 3 on the phone’s screen makes it scratch resistant.

Further, like all BlackBerry phones, the KEY2 comes pre-loaded with its proprietary DTEK security app. DTEK enables users to automatically view how apps may be accessing their personal data and manage permissions appropriately. The phone also features another pre-loaded security app called, Locker, which helps users secure private data like photos and downloaded files and can be accessed through a fingerprint or password.

The BlackBerry KEY 2 will start retailing on Amazon.in from July 31 onwards. It will be bundled with Reliance Jio’s cashback offer of Rs 4,450 and an ICICI bank cashback offer of 5%, along with other additional launch benefits.