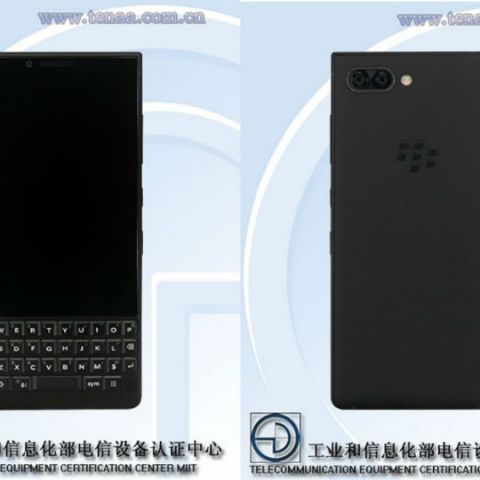 While the world still decides whether to like the notch or not, Blackberry’s QWERTY-keyboard sporting phones continues to buck the trend. After having sold 850,000 units of the Blackberry KEYone last year, Blackberry-licensee TCL could be working on another device with similar form-factors. Codenamed Athena, detailed renders of the phone had cropped up earlier. Now, the same phone has been spotted again on theTENAA website, indicating that the phone is indeed coming to the masses. What’s unknown though is the official name the phone is going to sport.

The renders indicate the phone will look quite similar to the Blackberry KEYone (review), with a premium rubberised rear panel and a glossy physical keyboard. The phone seems to retain the 3:2 aspect ratio display. A new addition is the dual cameras at the back, which if it’s true, could be the first Blackberry phone to come with the upgrade. There’s also a 3.5mm port and a USB Type-C at the bottom while the Blackberry Convenience Key at the back have been premiumified with a metallic texture.

There’s no hardware information available though about the phone. The TENAA renders only hints at the design of the phone. Meanwhile, Blackberry’s licensee for the Indian subcontinent, Optiemus will be releasing two Blackberry devices, the Ghost and the Ghost Pro, with 18:9 univisium display and protected by Blackberry’s suite of security features.

The imminent launch of the three smartphones indicates Blackberry no longer wants to operate in a niche. The keyboard-laden Athena could serve the niche while the Ghost and the Ghost aim for the mainstream.