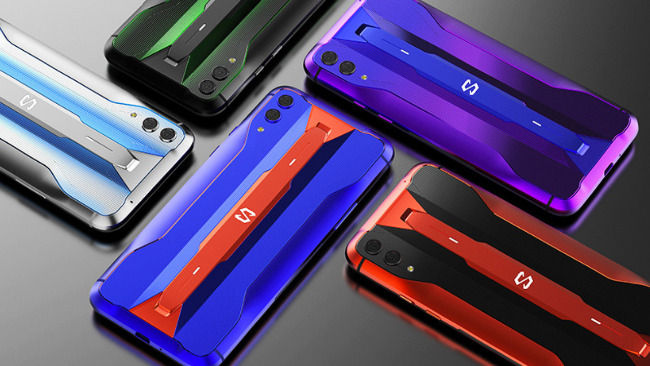 With the Snapdragon 855 Plus now announced, gaming smartphones now have a way to differentiate themselves in terms of the hardware under the hood. The Asus ROG Phone II was the first phone to sport the gaming SoC and now Black Shark has also jumped into the fray with the Black Shark 2 Pro. The gaming phone was announced at an event in China

The major upgrade in the Black Shark 2 Pro is of course the chipset that powers it. The Snapdragon 855 Plus is slightly faster than the regular variant with a max clock speed of 2.94GHz as compared to 2.86GHz on the standard version. That allows Qualcomm to offer a host of features that should delight a mobile gamer. That includes rich HDR graphics, reduced janks during gameplay and Q-sync which syncs the frame rates with the display refresh rate to make gameplay smoother. Along with the SD855+, there’s now 12GB RAM in both the variants and UFS 3.0 storage. On the outside, there are now more RGB LED strips with two more strips flanking the RGB-lit Black Shark logo on the center.

There are some more minor tweaks that should help with gaming on the device which includes a lower touch response of the 6.39-inch AMOLED display. The touch latency on the Black Shark 2 Pro is claimed to be 34.7ms against 43.5ms on the predecessor. Along the same lines, the secondary camera on the back is now a 13MP sensor as compared to a 12MP one on the Black Shark 2.

The software remains the same on the device, however, save for the new Black Space Dock 4.0, the company’s new gaming mode. This replaces the Shark Space that existed on the previous offering.

The Black Shark 2 Pro’s exterior design has changed a bit though. The back panel is improved for a better grip and there’s now few more colour options to choose from — Racing, Flamingo and Myth Ray, launched in partnership with LNG Esports, an Esports team from China. Black Shark also launched new cases and bumpers along with two gaming headsets — An in-ear type and another over-the-ear.